A team of astronomers led by Brendan Bowler of The University of Texas at Austin has probed the formation process of giant exoplanets and brown dwarfs, a class of objects that are more massive than giant planets, but not massive enough to ignite nuclear fusion in their cores to shine like true stars. Using direct imaging with the Keck Telescope and the Subaru Telescope in Hawaii, they studied the orbits of these faint companions orbiting stars in 27 systems. These data, combined with modeling of the orbits, allowed them to determine that the brown dwarfs in these systems formed like stars, but the gas giants formed like planets. The research is published in the current issue of The Astronomical Journal. 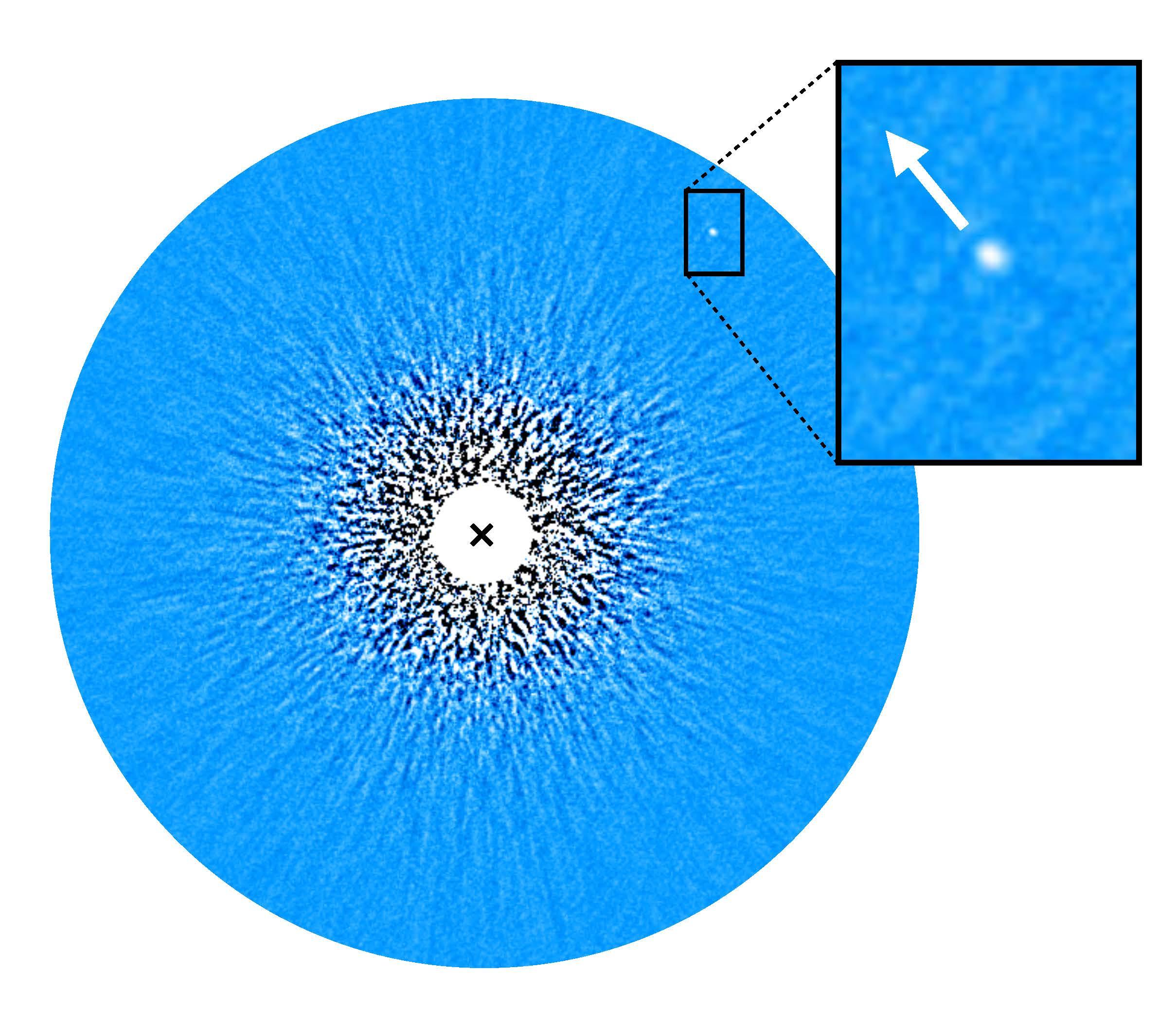 Figure 1: Brown Dwarf GJ 504 B. This image of the low-mass brown dwarf GJ 504 B was taken by Bowler and his team using adaptive optics with the NIRC2 camera at Keck Observatory in Hawaii. The image has been processed to remove light from the host star (whose position is marked with an "x"). The companion is located at a separation of about 40 times the Earth-Sun distance and has an orbital period of about 240 years. By returning to this and other systems year after year, the team is able to slowly trace out part of the companion's orbit to constrain its shape, which provides clues about its formation and history. (Credit: Brendan Bowler (UT-Austin)/W. M. Keck Observatory)

In the last two decades, technological leaps have allowed telescopes to separate the light from a parent star and a much-dimmer orbiting object. In 1995, this new capability produced the first direct images of a brown dwarf orbiting a star. The first direct image of planets orbiting another star followed in 2008.

"Over the past 20 years, we've been leaping down and down in mass," Bowler said of the direct imaging capability, noting that the current limit is about 1 Jupiter mass. As the technology has improved, "One of the big questions that has emerged is 'What's the nature of the companions we're finding?'"

Brown dwarfs, as defined by astronomers, have masses between 13 and 75 Jupiter masses. They have characteristics in common with both planets and with stars, and Bowler and his team wanted to settle the question: Are gas giant planets on the outer fringes of planetary systems the tip of the planetary iceberg, or the low-mass end of brown dwarfs? Past research has shown that brown dwarfs orbiting stars likely formed like low-mass stars, but it's been less clear what is the lowest mass companion this formation mechanism can produce.

"One way to get at this is to study the dynamics of the system — to look at the orbits," Bowler said. Their orbits today hold the key to unlocking their evolution.

Bowler's team used the Keck Telescope and the Subaru Telescope to take images of giant planets and brown dwarfs as they orbit their parent stars.

It's a long process. The gas giants and brown dwarfs they studied are so distant from their parent stars that one orbit may take hundreds of years. To determine even a small percentage of the orbit, "You take an image, you wait a year," for the faint companion to travel a bit, Bowler said. Then "you take another image, you wait another year." 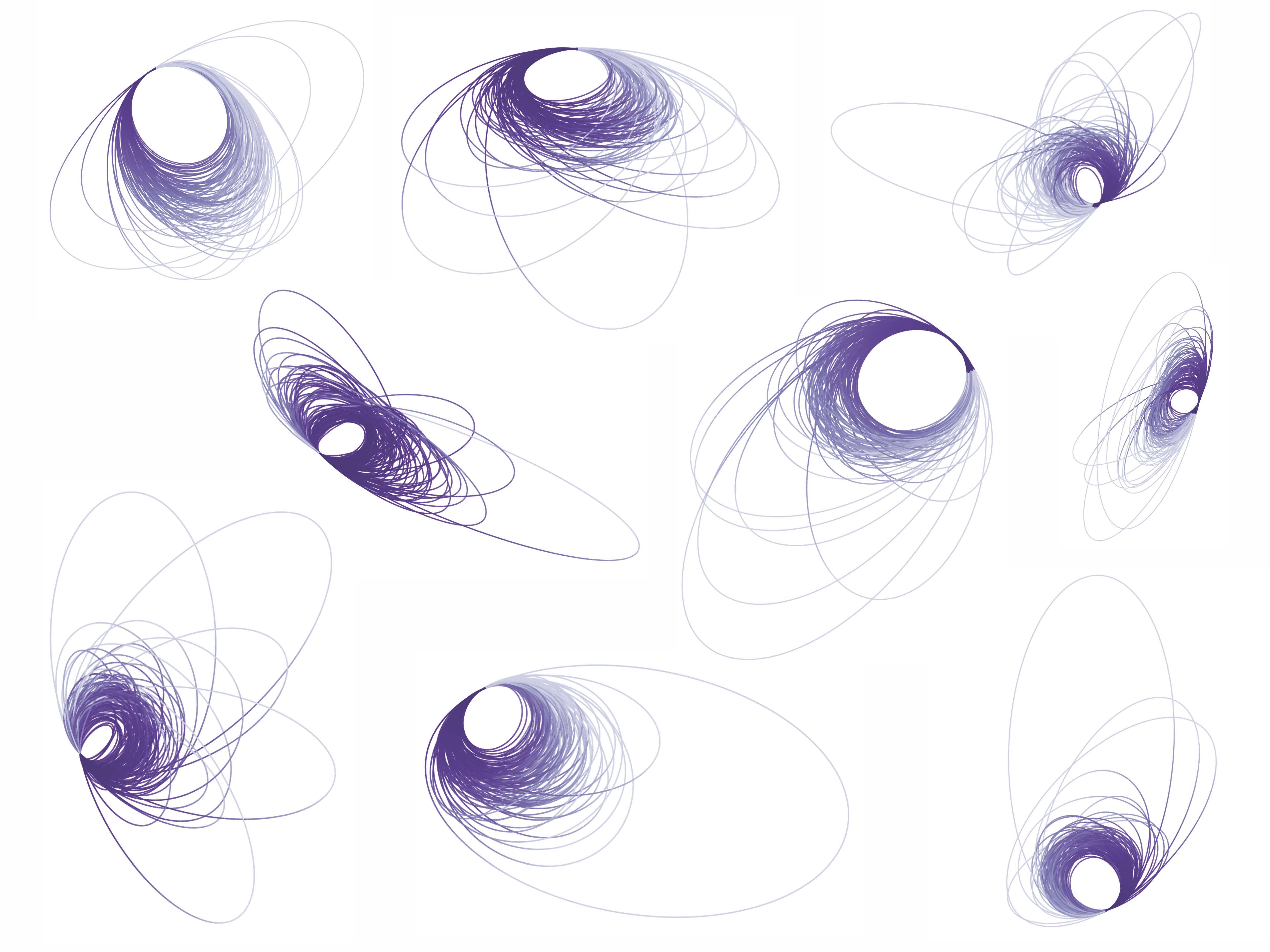 Figure 2: Possible Orbits for Giant Planets and Brown Dwarfs. By patiently watching giant planets and brown dwarfs orbit their host stars, Bowler and his team were able to constrain the orbit shapes even though only a small portion of the orbit has been monitored. The longer the time baseline, the smaller the range of possible orbits. These plots show nine of the 27 systems from their study. (Credit: Brendan Bowler (UT-Austin))

This research relied on technology called adaptive optics, which allows astronomers to correct for distortions caused by the Earth's atmosphere. As adaptive optics instruments have continually improved over the past three decades, more brown dwarfs and giant planets have been directly imaged. But since most of these discoveries have been made over the past decade or two, the team only has images corresponding to a few percent of each object's total orbit. They combined their new observations of 27 systems with all of the previous observations published by other astronomers or available in telescope archives.

At this point, computer modeling comes in. Coauthors on this paper have helped create an orbit-fitting code called "Orbitize!" which uses Kepler's laws of planetary motion to identify which types of orbits are consistent with the measured positions, and which are not.

The code generates a set of possible orbits for each companion. The slight motion of each giant planet or brown dwarf forms a "cloud" of possible orbits. The smaller the cloud, the more astronomers are closing in on the companion's true orbit. And more data points — that is, more direct images of each object as it orbits — will refine the shape of the orbit.

"Rather than wait decades or centuries for a planet to complete one orbit, we can make up for the shorter time baseline of our data with very accurate position measurements," said team member Eric Nielsen of Stanford University. "A part of Orbitize! that we developed specifically to fit partial orbits, OFTI [Orbits For The Impatient], allowed us to find orbits even for the longest period companions."

Finding the shape of the orbit is key: Objects that have more circular orbits probably formed like planets. That is, when a cloud of gas and dust collapsed to form a star, the distant companion (and any other planets) formed out of a flattened disk of gas and dust rotating around that star.

On the other hand, the ones that have more elongated orbits probably formed like stars. In this scenario, a clump of gas and dust was collapsing to form a star, but it fractured into two clumps. Each clump then collapsed, one forming a star, and the other a brown dwarf orbiting around that star. This is essentially a binary star system, albeit containing one real star and one "failed star."

"Even though these companions are millions of years old, the memory of how they formed is still encoded in their present-day eccentricity," Nielsen added. Eccentricity is a measure of how circular or elongated an object's orbit is. 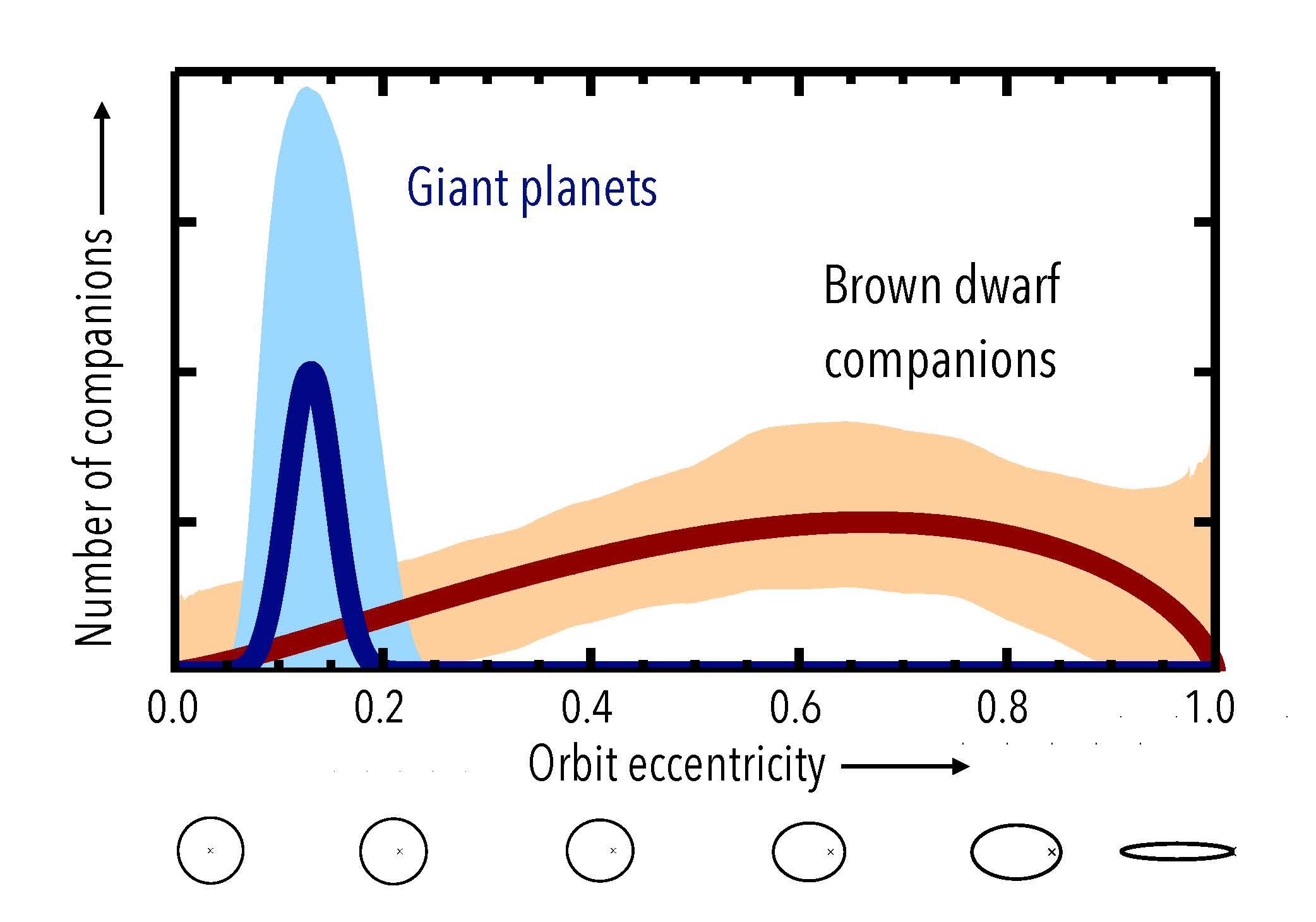 Figure 3: Eccentricity Distribution. These two curves show the final distribution of orbit shapes for giant planets and brown dwarfs. The orbital eccentricity determines how elongated the ellipse is, with a value of 0.0 corresponding to a circular orbit and a high value near 1.0 being a flattened ellipse. Gas giant planets located at wide separations from their host stars have low eccentricities, but the brown dwarfs have a wide range of eccentricities similar to binary star systems. For reference, the giant planets in our solar system have eccentricities less than 0.1. (Credit: Brendan Bowler (UT-Austin))

The results of the team's study of 27 distant companions was unambiguous.

"The punchline is, we found that when you divide these objects at this canonical boundary of more than about 15 Jupiter masses, the things that we've been calling planets do indeed have more circular orbits, as a population, compared to the rest," Bowler said. "And the rest look like binary stars."

The future of this work involves both continuing to monitor these 27 objects, as well as identifying new ones to widen the study. "The sample size is still modest, at the moment," Bowler said. His team is using the Gaia satellite to look for additional candidates to follow up using direct imaging with even greater sensitivity at the forthcoming Giant Magellan Telescope (GMT) and other facilities. UT-Austin is a founding member of the GMT collaboration.

Bowler's team's results reinforce similar conclusions recently reached by the GPIES direct imaging survey with the Gemini Planet Imager, which found evidence for a different formation channel for brown dwarfs and giant planets based on their statistical properties.

This work was supported by a NASA Keck PI Data Award, administered by the NASA Exoplanet Science Institute. The Keck Observatory is managed by Caltech and the University of California.

This release is based on the press releases from W. M. Keck Observatory and McDonald Observatory/The University of Texas at Austin.