An international group of scientists led by the RIKEN Cluster for Pioneering Research has used observations from the Multi Unit Spectroscopic Explorer (MUSE) at the ESO Very Large Telescope (VLT) in Chile and Suprime-Cam at the Subaru Telescope to make detailed observations of the filaments of gas connecting galaxies in a large proto-cluster in the early Universe. Based on direct observations they found that, in accordance with predictions, the filaments are extensive, extending over more than 3 million light years and are providing the fuel for intense formation of stars and the growth of super massive black holes within the proto-cluster. 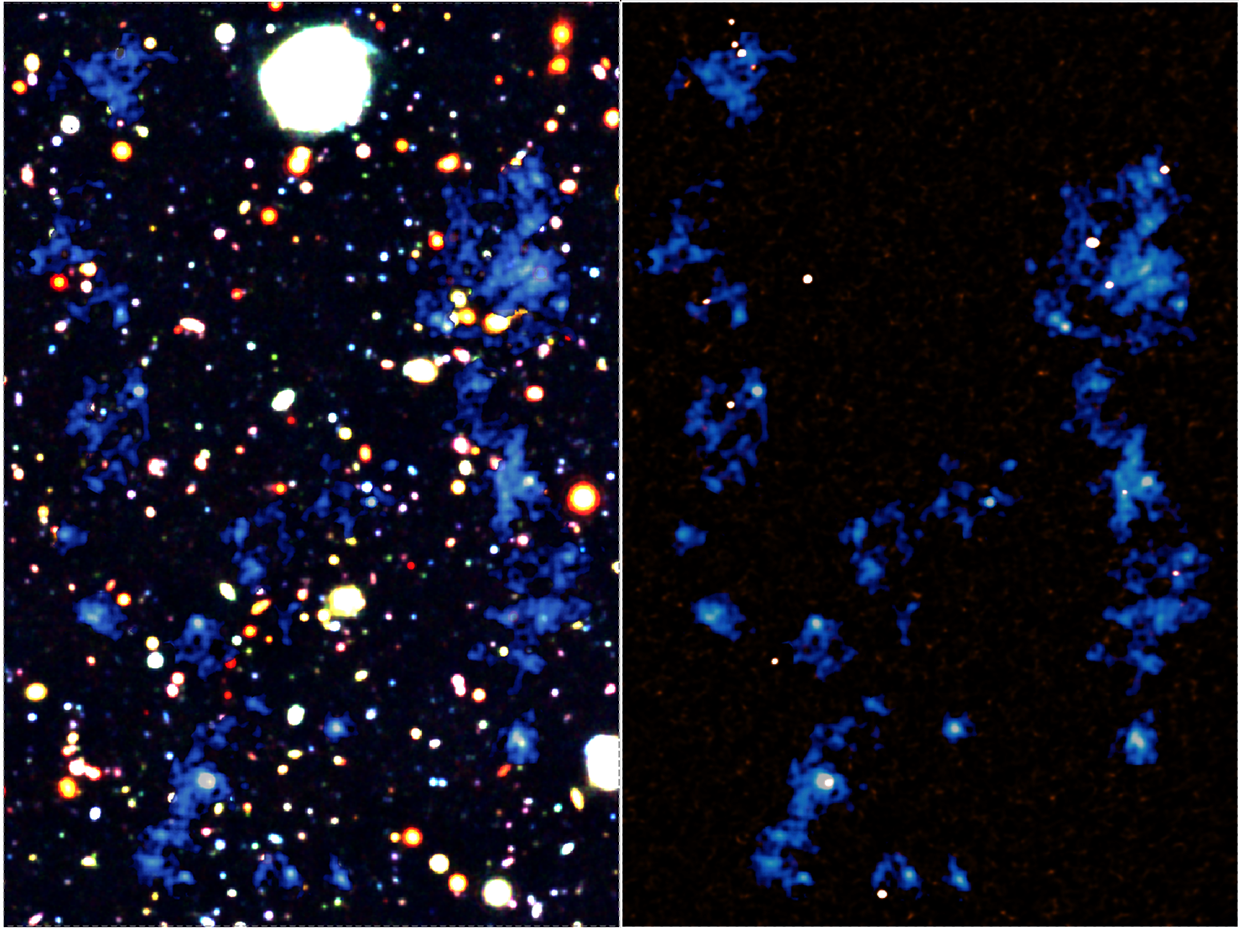 Figure 1: Maps of gas filaments. For both panels, identified gas filaments are shown in blue color. The background maps are an optical image taken with the Subaru Telescope (left) and a millimeter-wave image taken with ALMA (right). It is found that there are extensive gaseous structures and cosmic web filaments (left); and that the filaments connect a number of starbursting galaxies (right). (Credit: RIKEN)

The observations, which constitute a very detailed map of the filaments, were made on SSA22, a massive proto-cluster of galaxies located about 12 billion light years away in the constellation of Aquarius.

The findings give key insight on the galaxy formation model. Now it is generally believed that filaments in the early universe fueled the formation of galaxies and super massive black holes at places where the filaments crossed, creating dense regions of matter. In accordance with this, the group found that the intersection between the enormous filaments they identified is home to active galactic nuclei—supermassive black holes—and "starbursting" galaxies that have very active star formation. They determined their locations from observations made with the Atacama Large Millimeter/submillimeter Array (ALMA) and the W. M. Keck Observatory.

Their observations are based on the detection using the MUSE instrument of ultraviolet light that is produced by ionized hydrogen gas. The radiation was found to be intense. Their calculations indicated that the high radiation was likely triggered by star-forming galaxies and forming black holes.

According to Hideki Umehata of the RIKEN Cluster for Pioneering Research and the University of Tokyo, the lead author of the paper, "This suggests very strongly that gas falling along the filaments under the force of gravity triggers the formation of starbursting galaxies and supermassive black holes, giving the universe the structure that we see today."

"Previous observations," he continues, "had shown that there are emissions from blobs of gas extending beyond the galaxies, but now we have been able to clearly show that these filaments are extremely long, going even beyond the edge of the field that we viewed. This adds credence to the idea that these filaments are actually powering the intense activity that we see within the galaxies inside the filaments."

Co-author Michele Fumagalli from Durham University, UK, said: "It is very exciting to clearly see for the first time multiple and extended filaments in the early universe. We finally have a way to map these structures directly, and to understand in detail their role in regulating the formation of supermassive black holes and galaxies."

The work was done by the RIKEN Cluster for Pioneering Research along with collaborators from the University of Tokyo, Durham University in the UK, National Astronomical Observatory of Japan, Nagoya University, and other institutes.