Using the Subaru, Keck, and Gemini Telescopes, an international team of astronomers has discovered a collection of 12 galaxies in the constellation Cetus which existed about 13.0 billion years ago. This is the earliest protocluster ever found. One of the 12 galaxies is a giant object, known as Himiko, which was discovered a decade ago by the Subaru Telescope and named for a legendary queen in ancient Japan. This discovery suggests that large structures such as protoclusters already existed when the Universe was only about 800 million years old, 6 percent of its present age. 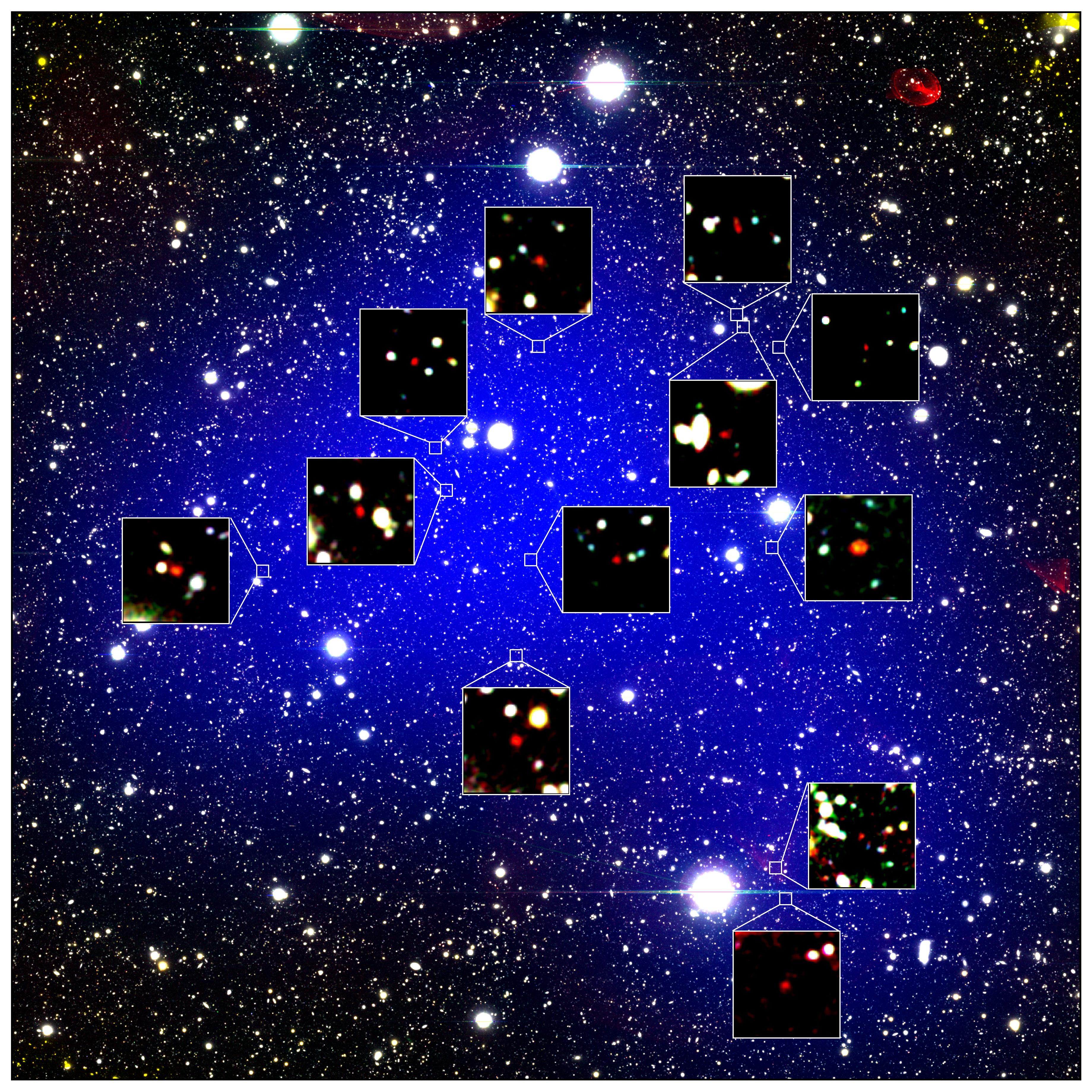 In the present Universe, galaxy clusters can contain thousands of members, but how these clusters form is a big question in astronomy. To understand the formation of clusters, astronomers search for possible progenitors in the ancient Universe, known as protoclusters. A protocluster is a dense system of dozens of galaxies in the early Universe, growing into a cluster. The previous record holder was the SDF protocluster, discovered by the Subaru Telescope in the Subaru Deep Field (SDF) near the constellation Coma Berenices.

Yuichi Harikane, a JSPS fellow at the National Astronomical Observatory of Japan who led the team of astronomers explains, "A protocluster is a rare and special system with an extremely high density, and not easy to find. To overcome this problem, we used the wide field of view of the Subaru Telescope to map a large area of the sky and look for protoclusters."

In the map of the Universe made by the Subaru Telescope, the team discovered a protocluster candidate, z66OD, where galaxies are 15 times more concentrated than normal for that era. The team then conducted follow-up spectroscopic observations using the W.M. Keck Observatory and Gemini North telescope, and confirmed 12 galaxies which existed 13.0 billion years ago, making it the earliest protocluster known to date. Yoshiaki Ono at the University of Tokyo, Japan, who conducted the spectroscopic observations, explains, "The z66OD protocluster is the earliest protoclutser, breaking the record set by the SDF protocluster by 100 million years."

Interestingly, one of the 12 galaxies in z66OD was a giant object with a huge body of gas, known as Himiko, which was found previously by the Subaru Telescope in 2009. "It is reasonable to find a protocluster near a massive object, such as Himiko. However, we're surprised to see that Himiko was located not in the center of the protocluster, but on the edge 50 million light-years away from the center." said Masami Ouchi, a team member at the National Astronomical Observatory of Japan and the University of Tokyo, who discovered Himiko in 2009. Ironically, the legendary queen Himiko is also said to have lived cloistered away from her people. Ouchi continues, "It is still not understood why Himiko is not located in the center. These results will be a key for understanding the relationship between clusters and massive galaxies."

Another surprise was that the team found very active star formation in the z66OD protocluster using observational results from the Subaru Telescope, United Kingdom Infra-Red Telescope, and Spitzer Space Telescope. "The total amount of stars forming in the galaxies in z660D is five times larger than in other galaxies with similar masses in the same age of the Universe. The galaxies in z66OD form stars very efficiently, probably because the large mass of the system helps it to collect a large amount of gas, the material for stars." explained Darko Donevski, a team member at SISSA Institute, Trieste, Italy.

Team member Seiji Fujimoto at Waseda University, Japan, comments, "Recent observations are revealing that protoclusters can also contain massive galaxies obscured by dust. Although we didn't find any such galaxies in z66OD, future observations, such as by ALMA (Atacama Large Millimeter/submillimeter Array), may find some, and reveal the entire structure of z66OD."


This research will be published on September 30, 2019 in The Astrophysical Journal as Yuichi Harikane, et al. "SILVERRUSH. VIII. Spectroscopic Identifications of Early Large Scale Structures with Protoclusters Over 200 Mpc at z~6-7: Strong Associations of Dusty Star-Forming Galaxies". This work was supported by the Japanese Ministry of Education, Culture, Sports, Science and Technology (MEXT) and the Japan Society for the Promotion of Science.