A team of researchers has succeeded in measuring the brightnesses and temperatures of Saturn's rings using the mid-infrared images taken by the Subaru Telescope in 2008. The images are the highest resolution ground-based views ever made. They reveal that, at that time, the Cassini Division and the C ring were brighter than the other rings in the mid-infrared light and that the brightness contrast appeared to be the inverse of that seen in the visible light (Figure 1). The data give important insights into the nature of Saturn's rings. 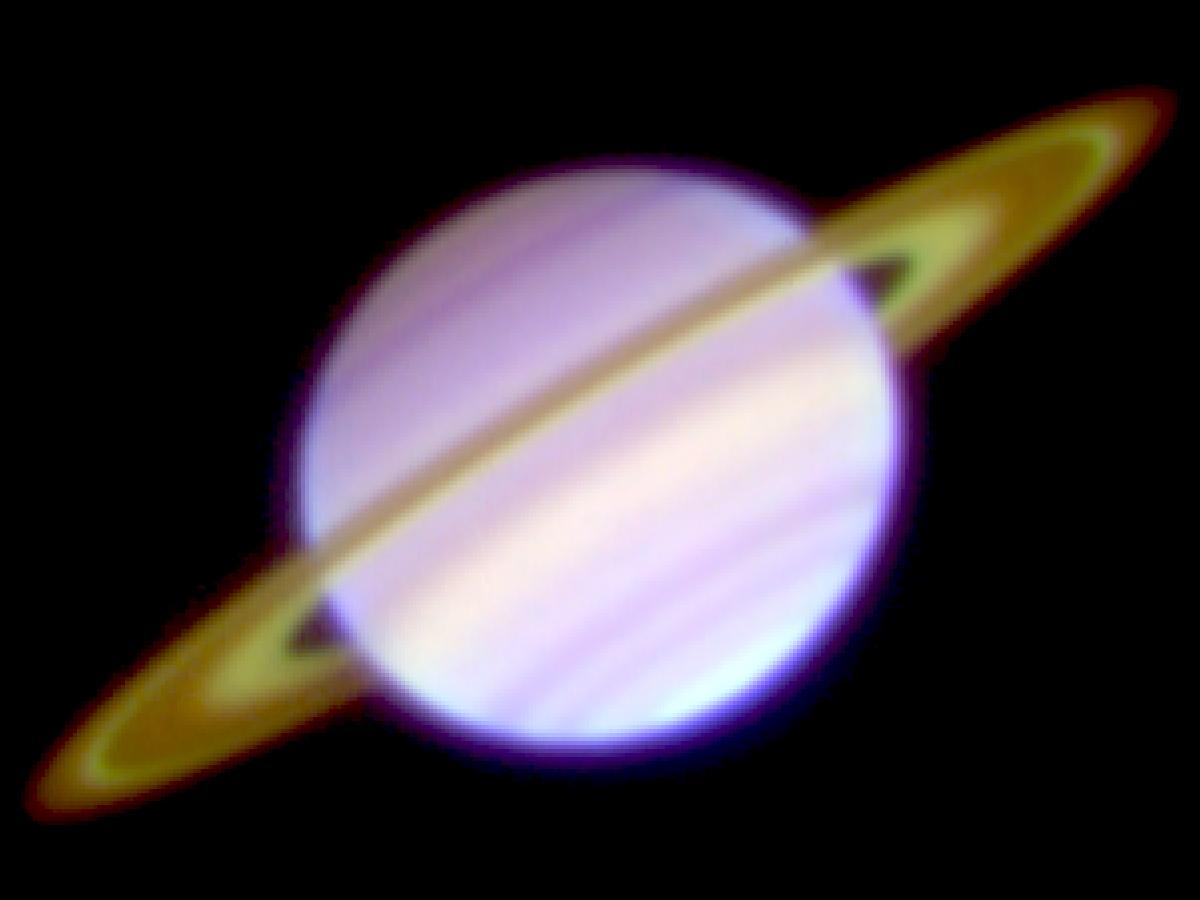 Figure 1: A three-color composite of the mid-infrared images of Saturn on January 23, 2008 captured with COMICS on the Subaru Telescope. The Cassini Division and the C ring appear bright. Color differences reflect the temperatures; the warmer part is blue, the cooler part is red. (Credit: NAOJ)

The beautiful appearance of Saturn and its rings has always fascinated people. The rings consist of countless numbers of ice particles orbiting above Saturn's equator. However, their detailed origin and nature remain unknown. Spacecraft- and ground-based telescopes have tackled that mystery with many observations at various wavelengths and methods. The international Cassini mission led by NASA has been observing Saturn and its rings for more than 10 years, and has released a huge number of beautiful images.

The Subaru Telescope also has observed Saturn several times over the years. Dr. Hideaki Fujiwara, Subaru Public Information Officer/Scientist, analyzed data taken in January 2008 using the Cooled Mid-Infrared Camera and Spectrometer (COMICS) on the telescope to produce a beautiful image of Saturn for public information purposes. During the analysis, he noticed that the appearance of Saturn's rings in the mid-infrared part of the spectrum was totally different from what is seen in the visible light

Figure 2: Comparison of the images of Saturn's rings in the 2008 view in the mid-infrared (left) and the visible light (right). The visible light image was taken on March 16, 2008 with the 105-cm Murikabushi telescope at Ishigakijima Astronomical Observatory. The radial brightness contrast of Saturn's rings is the inverse between the two wavelength ranges. (Credit: NAOJ)

"Thermal emission" from ring particles is observed in the mid-infrared, where warmer particles are brighter. The team measured the temperatures of the rings from the images, which revealed that the Cassini Division and the C ring are warmer than the B and A rings. The team concluded that this was because the particles in the Cassini Division and C ring are more easily heated by solar light due to their sparser populations and darker surfaces.

On the other hand, in the visible light, observers see sunlight being reflected by the ring particles. Therefore, the B and A rings, with their dense populations of particles, always seem bright in the visible wavelengths, while the Cassini Division and the C ring appear faint. The difference in the emission process explains the inverse brightnesses of Saturn's rings between the mid-infrared and the visible-light views. 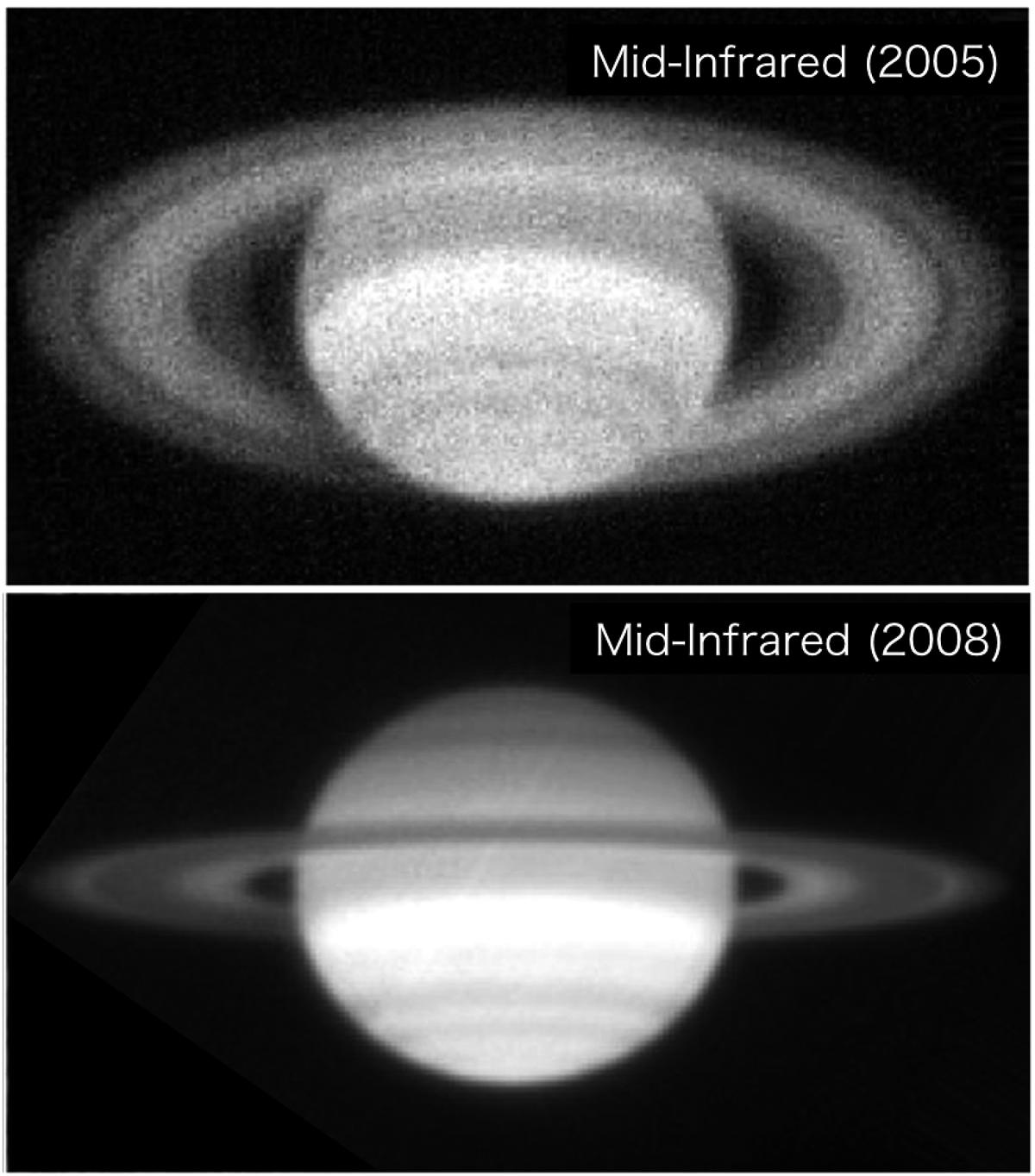 The team concluded that the "inversion" of the brightness of Saturn's rings between 2005 and 2008 was caused by the seasonal change in the ring opening angle to the Sun and Earth. Since the rotation axis of Saturn inclines compared to its orbital plane around the Sun, the ring opening angle to the Sun changes over a 15-year cycle. This makes a seasonal variation in the solar heating of the ring particles. The change in the opening angle viewed from the Earth affects the apparent filling factor of the particles in the rings. These two variations – the temperature and the observed filling factor of the particles – led to the change in the mid-infrared appearance of Saturn's rings.

The data taken with the Subaru Telescope revealed that the Cassini Division and the C ring are sometimes bright in the mid-infrared though they are always faint in visible light. "I am so happy that the public information activities of the Subaru Telescope, of which I am in charge, led to this scientific finding," said Dr. Fujiwara. "We are going to observe Saturn again in May 2017 and hope to investigate the nature of Saturn's rings further by taking advantages of observations with space missions and ground-based telescopes."

This research is published in Astronomy & Astrophysics, Volume 599, A29 and posted on-line on February 23, 2017 (Fujiwara et al., 2017, "Seasonal variation of the radial brightness contrast of Saturn's rings viewed in mid-infrared by Subaru/COMICS"). This work is supported JSPS KAKENHI Grant Numbers JP23103002 and JP26800110.