Ancient Eye in the Sky

Light from a distant galaxy can be strongly bent by the gravitational influence of a foreground galaxy. That effect is called strong gravitational lensing. Normally a single galaxy is lensed at a time. The same foreground galaxy can – in theory – simultaneously lens multiple background galaxies. Although extremely rare, such a lens system offers a unique opportunity to probe the fundamental physics of galaxies and add to our understanding of cosmology. One such lens system has recently been discovered and the discovery was made not in an astronomer’s office, but in a classroom. It has been dubbed the Eye of Horus (Fig. 1), and this ancient eye in the sky will help us understand the history of the universe. 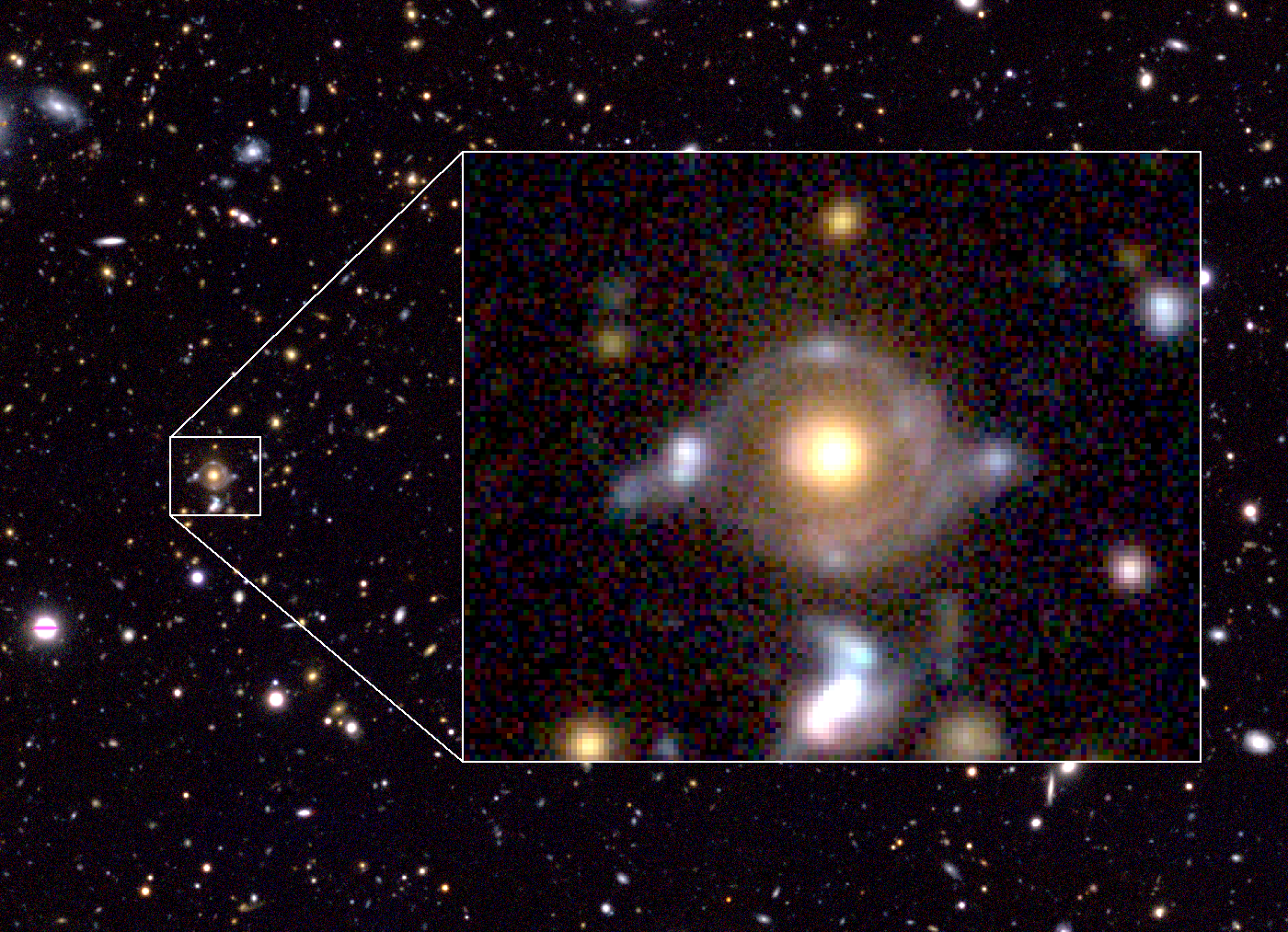 Figure 1: Eye of Horus in pseudo color. Enlarged image to the right (field of view of 23 arcseconds x 19 arcseconds) show two arcs/rings with different colors. The inner arc has a reddish hue, while the outer arc has a blue tint. These arcs are lensed images of the two background galaxies. There are blobs in and around the arcs/rings, which are also the lensed images of those background galaxies. The yellow-ish object at the center is a massive galaxy at z = 0.79 (distance 7 billion light years), which bends the light from the two background galaxies. The wide field image in the background is here. Enlarged image of the Eye of Horus is here and the image with labels is here. (Credit: NAOJ)

Subaru Telescope organizes a school for undergraduate students each year. One such session was held in September 2015 at the NAOJ headquarters in Mitaka, Tokyo (Fig. 2). Subaru is currently undertaking a massive survey to image a large area of the sky at an unprecedented depth with Hyper Suprime-Cam as part of the Subaru Strategic Program. A group of astronomers and young students were analyzing some of that Hyper Suprime-Cam data at the school when they found a unique lens system. It was a classic case of a serendipitous discovery.

"When I was looking at HSC images with the students, we came across a ring-like galaxy and we immediately recognized it as a strong-lensing signature," said Masayuki Tanaka, the lead author of a science paper on the system’s discovery. "The discovery would not have been possible without the large survey data to find such a rare object, as well as the deep, high quality images to detect light from distant objects."

Arsha Dezuka, a student who was working on the data, was astonished at the find. "It was my first time to look at the astronomical images taken with Hyper Suprime-Cam and I had no idea what the ring-like galaxy is," she said. "It was a great surprise for me to learn that it is such a rare, unique system!" 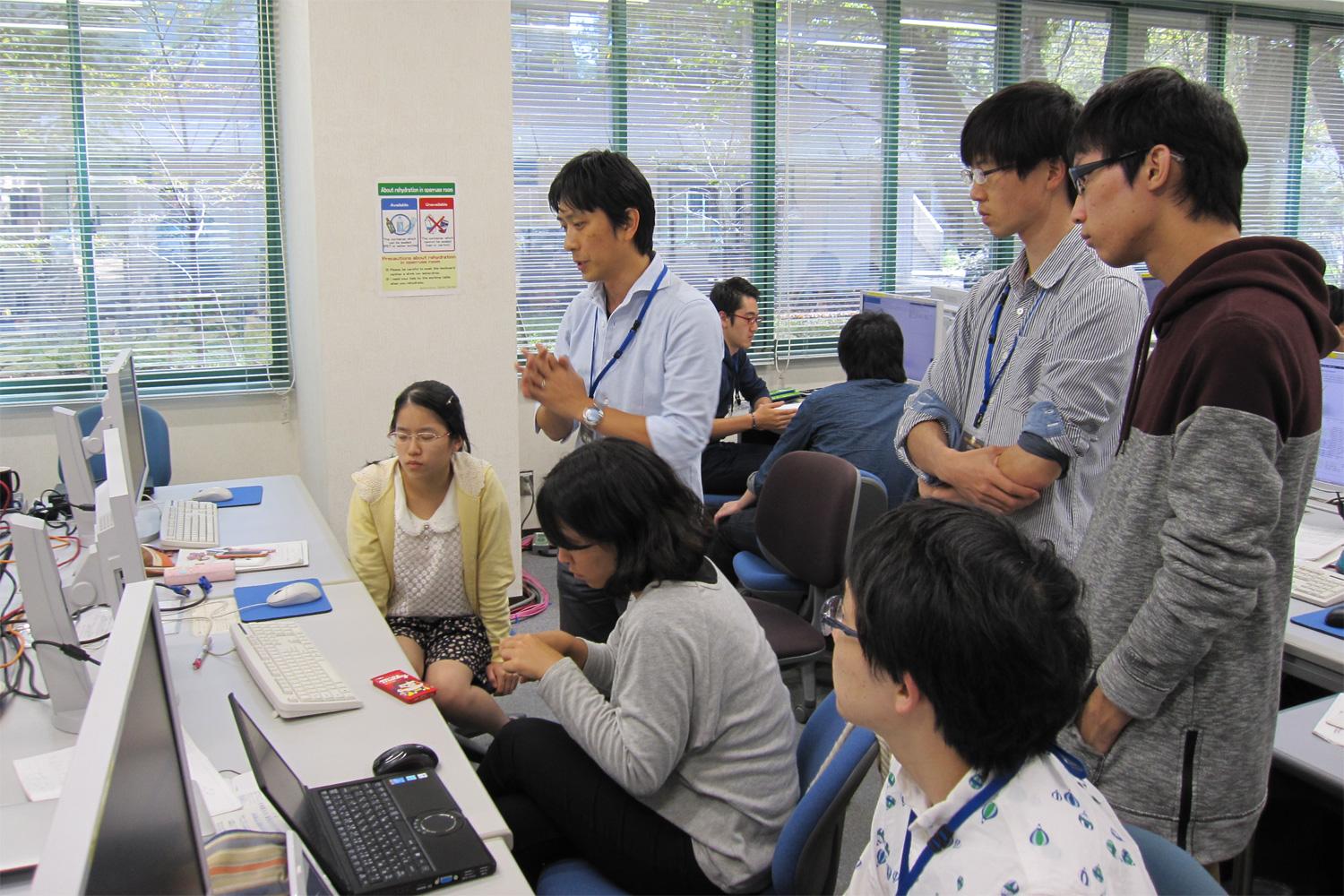 A close inspection of the images revealed two distinct arcs/rings of light with different colors. This strongly suggested that two distinct background galaxies were being lensed by the foreground galaxy. The lensing galaxy has a spectroscopic redshift of z = 0.79 (which means it’s 7.0 billion light-years away, Note 1) based on data from the Sloan Digital Sky Survey. Follow-up spectroscopic observations of the lensed objects using the infrared-sensitive FIRE spectrometer on the Magellan Telescope confirmed that there are actually two galaxies behind the lens. One lies at z = 1.30 and the other is at z = 1.99 (9.0 and 10.5 billion light-years away, respectively).

"The spectroscopic data reveal some very interesting things about the background sources," said Kenneth Wong from NAOJ, the second author of the scientific paper describing the system. "Not only do they confirm that there are two sources at different distances from us, but the more distant source seems to consist of two distinct clumps, which could indicate an interacting pair of galaxies. Also, one of the multiple images of that source is itself being split into two images, which could be due to a satellite galaxy that is too faint for us to see."

The distinct features for the system (several bright knots, an arc, a complete Einstein ring) arise from the nice alignment of the central lens galaxy and both sources, creating an eye-like structure (Fig.3). The astronomers dubbed it Eye of Horus, for the sacred eye of an ancient Egyptian god, since the system has an uncanny resemblance to it. 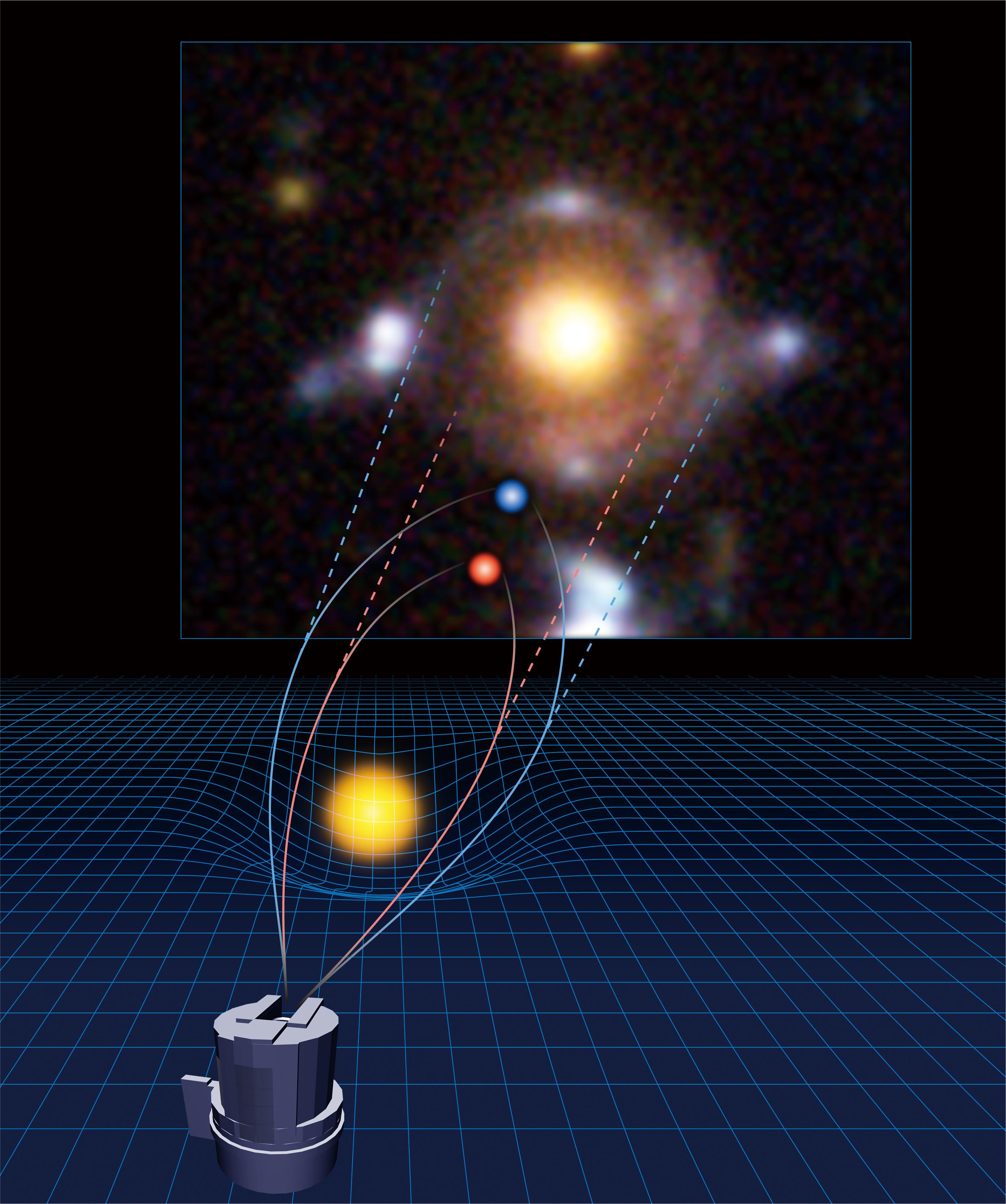 The survey with Hyper Suprime-Cam is only 30% complete and it will collect data for several more years. Astronomers expect to find roughly 10 more such systems in the survey, which will provide important insights into the fundamental physics of galaxies as well as how the universe expanded over the last several billion years.

1. Conversion of the distance from the redshift uses the following cosmological parameters - H0=67.3km/s/Mpc, Ωm=0.315, Λ=0.685, based on Planck 2013 Results. For details about the cosmological distance, refer Expressing the distance to remote objects page.