Astronomers using the Subaru Telescope's Hyper Suprime-Cam prime-focus camera recently observed the nearby large spiral galaxy M81, together with its two brightest neighbors, M82 and NGC 3077. The results of their observations are deep, super wide-field images of the galaxies and their populations of young stars. As part of a Galactic Archaeology study, the team discovered that the spatial distribution of the young stars around these galaxies follows very closely that of their distribution of neutral hydrogen. "This is the first endeavor beyond the Local Group of galaxies to demonstrate the hierarchical galaxy assembly process on galactic scales," said team member Dr. Sakurako Okamoto (Shanghai Astronomical Observatory). 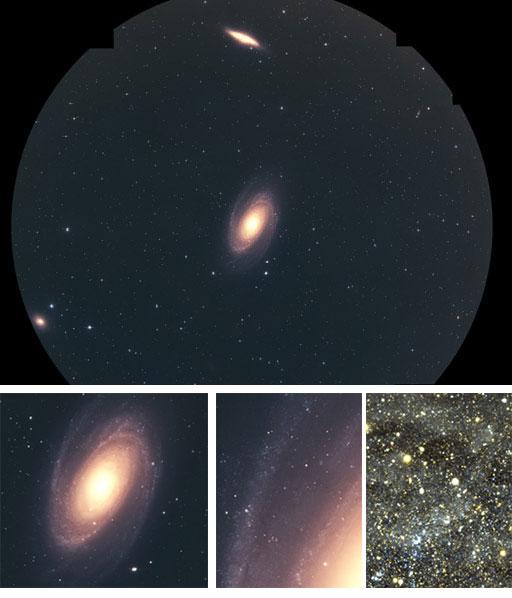 Figure 1: Pseudo-color images from HSC observation which contains M81, M82, and NGC 3077. Diameter of the FOV is 1.5 degrees. Bottom-left: close-up of M81. Bottom-center: further close-up of M81 showing the spiral arm. Bottom-right: color composite of the images used for the analysis. Click to enlarge each frame. (Credit: NAOJ/HSC Project)

Cosmological archaeological studies such as this one help astronomers refine their understanding of galaxy formation and evolution. The currently favored cosmological galaxy models are based on the idea of hierarchical structure formation: that structures in the universe such as galaxies develop from small "overdensities" to become large-scale objects. For example, the Milky Way and M81 first formed as part of a local over-density in the primordial matter distribution – that is, the earliest accumulations of matter in the young universe. They grew over time via the agglomeration of numerous smaller building blocks, some of which may have survived later mergers to become present-day dwarf satellite galaxies. Establishing the presence and nature of these satellites, and determining the large-scale structure and stellar content of halos in spiral galaxies, is essential to understand and explain the physics of hierarchical galaxy assembly.

Over the last decade, astronomers doing large photometric surveys (that is, measuring the light intensities of celestial objects) have found a number of new satellite galaxies, stellar streams, and over-densities around the Milky Way and the Andromeda galaxies. The detailed properties of stars in these systems are studied to reconstruct the stellar contents of galaxies in the early stage, which is called "Galactic Archeology" or "near-field cosmology". For the Galactic Archeology study, it is necessary to resolve individual stars in a galaxy, and observe across a good fraction of the galaxy's radius.

Until now, the outskirts of the Milky Way and Andromeda are the only places that have been surveyed to sufficiently faint depths to enable detailed tests of hierarchical galaxy assembly process across wide scales.

The observing team started the M81 archeology study by using Hyper Suprime-Cam (HSC). M81, also known as Bode's Galaxy, is located at a distance of 11.7 million light-years, and is one of the nearest massive spiral galaxies similar to the Milky Way. The super-wide field of view of the HSC allowed the team to observe out to a projected radius of a half-million light-years from the center of M81. The field includes 18 known member galaxies of the M81 group in only seven pointings. The camera's high sensitivity enabled the team to observe vast numbers of old red giant branch (RGB) stars as well as young main-sequence (MS) stars, red supergiants, and asymptotic giant-branch stars at the distance of M81.

The left panel in Figure 2 shows the spatial distribution of young MS stars and core helium-burning stars, which are color-coded according to their i-band luminosity. Bright stars are mainly located in the inner disk of M81, while most of the young stars in outlying concentrations are fainter than i=24 mag and have similar luminosity distributions as that of the stellar stream between M81 and NGC 3077. They are between 30-160 million years old. The study indicates the ages of stars in these tidal features are synchronized to each other, and that these systems were produced by recent tidal interactions between M81, M82 and NGC 3077. 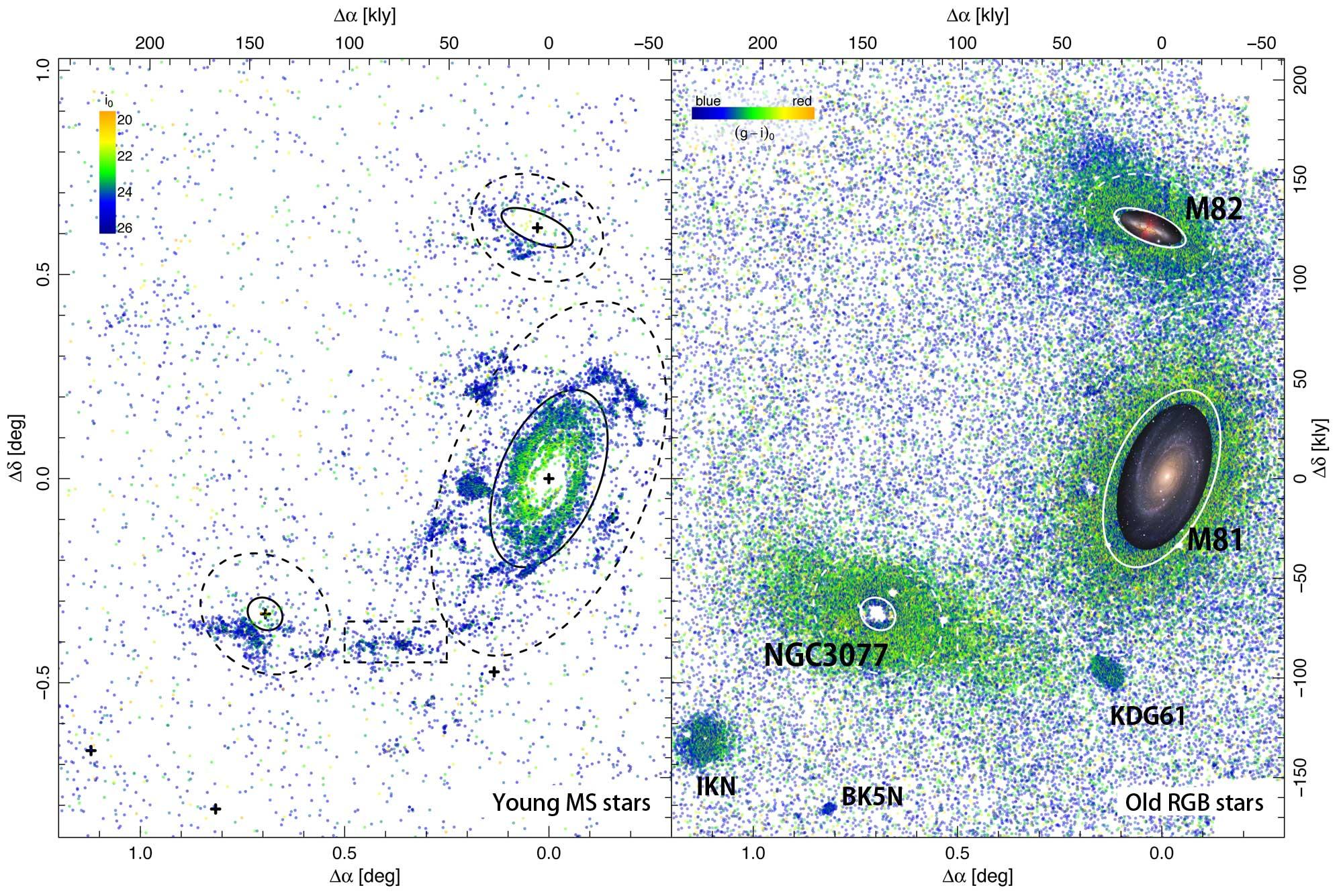 The distribution of RGB stars in the right panel of Figure 2 shows that the extended stellar halos of the three main galaxies overlap each other, and that the outer regions of M82 and NGC 3077 are highly perturbed. This is likely a consequence of the recent gravitational encounter.

The color of each point in the figure is a rough proxy for metallicity. The RGB stars in M82's outer halo have significantly bluer colors, showing that they are more metal-poor than those in M81, the NGC 3077 halos and the inner halo of M82. The satellite galaxies, KDG 61, BK5N, and IKN cannot be seen in the maps of young stars, but appear as over-densities of old populations in the right panel. This implies they are not the product of the recent interaction between M81, M82 and NGC 3077.

The science team for this study consists of astronomers at Shanghai Astronomical Observatory, National Astronomical Observatory of Japan, Hiroshima University, University of Edinburgh, and University of Cambridge. Their first results from the M81 study with Suprime-Cam on Subaru Telescope were released in March 2010 at:(http://www.subarutelescope.org/Pressrelease/2010/03/18/index.html).

Team member Dr. Sakurako Okamoto (Shanghai Astronomical Observatory) commented on this program: "Our deep panoramic view of the M81 group demonstrates that the complexity long known to be present in neutral hydrogen (HI) is equally matched in the low surface brightness stellar component. Together with the Galactic Archeology study based on the HSC wide-field survey of the Subaru Strategic Program, we hope to establish the presence and nature of satellite galaxies, and determine the large-scale structure and stellar content of halos of spiral galaxies in general".

The team members are grateful to the entire staff at Subaru Telescope and the HSC team. They acknowledge the importance of Maunakea within the indigenous Hawaiian community.


The research paper titled "A Hyper Suprime-Cam View of the Interacting Galaxies of the M81 Group" will be published in the Astrophysical Journal Letters. This work was supported by the grants of CAS (XDB09010100), NSFC (11333003), and JSPS (Grant-in-Aid for Young Scientists B, 26800103).


Members of the research team: