Using the Subaru Telescope, researchers at the Special Astrophysical Observatory in Russia and Kyoto University in Japan have found evidence that enigmatic objects in nearby galaxies – called ultra-luminous X-ray sources (ULXs) – exhibit strong outflows that are created as matter falls onto their black holes at unexpectedly high rates. The strong outflows suggest that the black holes in these ULXs must be much smaller than expected. Curiously, these objects appear to be "cousins" of SS 433, one of the most exotic objects in our own Milky Way Galaxy. The team's observations help shed light on the nature of ULXs, and impact our understanding of how supermassive black holes in galactic centers are formed and how matter rapidly falls onto those black holes (Figure 1). 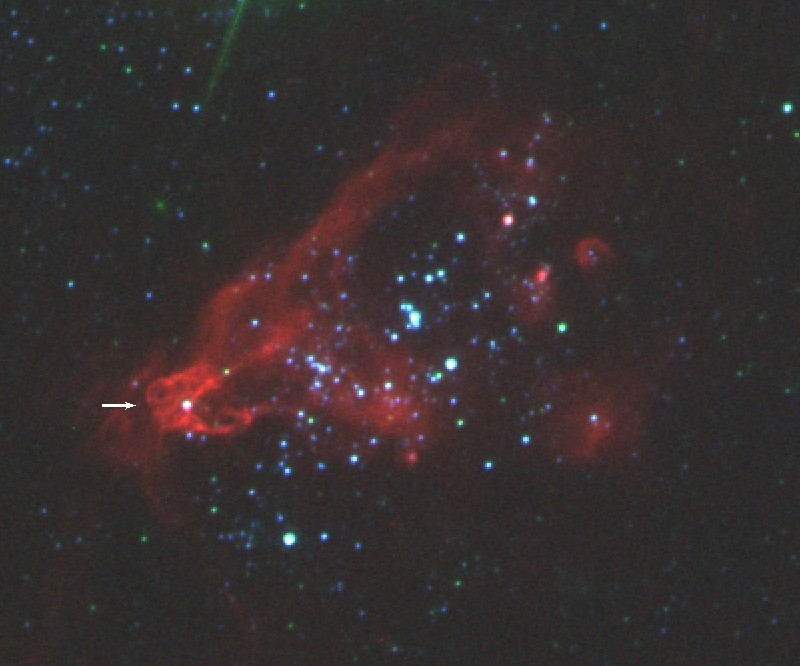 Figure 1: Multi-color optical image around the ULX "X-1" (indicated by the arrow) in the dwarf galaxy Holmberg II, located in the direction of the constellation Ursa Major, at a distance of 11 million light-years. The image size corresponds to 1,100 × 900 light-years at the galaxy. The red color represents spectral line emission from hydrogen atoms. (Credit: Special Astrophysical Observatory/Hubble Space Telescope)

X-ray observations of nearby galaxies have revealed these exceptionally luminous sources at off-nuclear positions that radiate about million times higher power than the Sun. The origins of ULXs have been a subject of heated debate for a long time. The basic idea is that a ULX is a close binary system consisting of a black hole and a star. As matter from the star falls onto the black hole, an accretion disk forms around the black hole. As the gravitational energy of the material is released, the innermost part of the disk is heated up to a temperature higher than 10 million degrees, which causes it to emit strong X-rays.

There are two different black hole scenarios proposed to explain these objects: (1) they contain very "big" black holes that could be more than a thousand times more massive than the Sun (Note 1), or (2) they are relatively small black holes, "little monsters" with masses no more than a hundred times that of the Sun, that shine at luminosities exceeding theoretical limits for standard accretion (called "supercritical (or super-Eddington) accretion," Note 2). Such supercritical accretion is expected to produce powerful outflow in a form of a dense disk wind.

To understand which scenario explains the observed ULXs researchers observed four objects: Holmberg II X-1, Holmberg IX X-1, NGC 4559 X-7, NGC 5204 X-1, and took high-quality spectra with the FOCAS instrument on Subaru Telescope for four nights. Figure 1 shows an optical multi-color image toward Holmberg II X-1 as observed with Hubble Space Telescope. The object X-1, indicated by the arrow, is surrounded by a nebula (colored in red), which is most likely the gas heated by strong radiation from the ULX.

The team discovered a prominent feature in the optical spectra of all the ULXs observed (Figure 2). It is a broad emission line from helium ions, which indicates the presence of gas heated to temperatures of several tens of thousands of degrees in the system. In addition, they found that the width of the hydrogen line, which is emitted from cooler gas (with a temperature of about 10,000 K), is broader than the helium line. The width of a spectral line reflects velocity dispersion of the gas and shows up due to the Doppler effect caused by a distribution of the velocities of gas molecules. These findings suggest that the gas must be accelerated outward as a wind from either the disk or the companion star and that it is cooling down as it escapes. 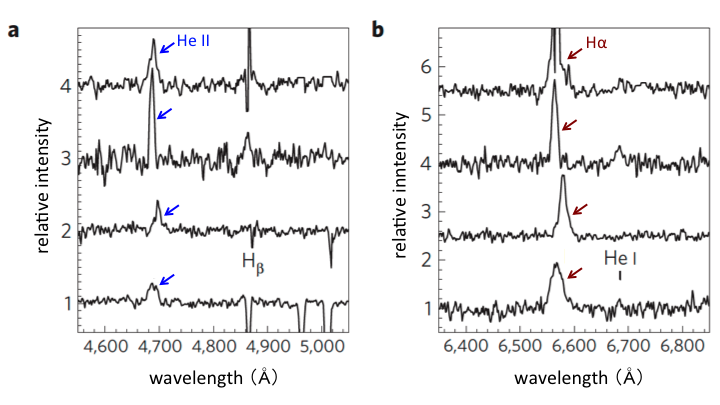 Distant ULXs and a Similar Mysterious Object in the Milky Way

The activity of these ULXs in distant galaxies is very similar to a mysterious object in our own Milky Way. The team noticed that the same line features are also observed at SS 433, a close binary consisting of an A-type star and most probably a black hole with a mass less than 10 times that of the Sun. SS 433 is famous for its persistent jets with a velocity of 0.26 times the speed of light. It is the only confirmed system that shows supercritical accretion (that is, an excessive amount of accretion that results in a very powerful outflow). By contrast, such features have not been observed from "normal" black hole X-ray binaries in the Milky Way where sub-critical accretion takes place.

After carefully examining several possibilities, the team concluded that huge amounts of gas are rapidly falling onto "little monster" black holes in each of these ULXs, which produces a dense disk wind flowing away from the supercritical accretion disk. They suggest that "bona-fide" ULXs with luminosities of about million times that of the Sun must belong to a homogeneous class of objects, and SS 433 is an extreme case of the same population. In these, even though the black hole is small, very luminous X-ray radiation is emitted as the surrounding gas falls onto the disk at a huge rate.

Figure 3 is a schematic view of the ULXs (upper side) and SS 433 (lower side). If the system is observed from a vertical direction, it's clear that the central part of the accretion disk emits intense X-rays. If SS 433 were observed in the same direction, it would be recognized as the brightest X-ray source in the Milky Way. In reality, since we are looking at SS 433 almost along the disk plane, our line-of-sight view towards the inner disk is blocked by the outer disk. The accretion rate is inferred to be much larger in SS 433 than in the ULXs, which could explain the presence of persistent jets in SS 433. 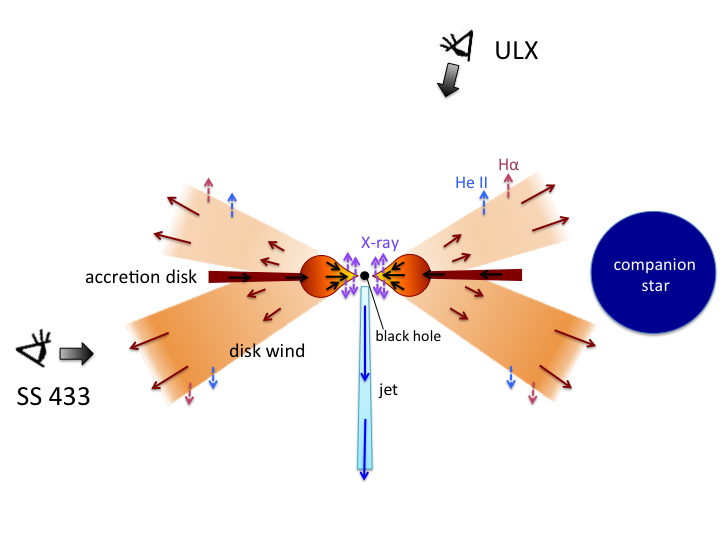 Figure 3: Schematic view of ULXs (looking from upper side) and SS 433 (looking from left side). Strong X-rays are emitted from the inner region of the supercritical accretion disk. Powerful winds are launched from the disk, which eventually emit spectral lines of helium ions and hydrogen atoms. (Credit: Kyoto University)

Such "supercritical accretion" is thought to be a possible mechanism in the formation of supermassive black holes at galactic centers in very short time periods (which are observed very early in cosmic time). The discovery of these phenomena in the nearby universe has significant impacts on our understanding of how supermassive black holes are formed and how matter rapidly falls onto them.

There are still some remaining questions: What are the typical mass ranges of the black holes in ULXs? In what conditions can steady baryonic jets as observed in SS 433 be produced? Dr. Yoshihiro Ueda, a core member of the team, expresses his enthusiasm for future research in this area. "We would like to tackle these unresolved problems by using the new X-ray observations by ASTRO-H, planned to be launched early next year, and by more sensitive future X-ray satellites, together with multi-wavelength observations of ULXs and SS 433," he said.

This work has been published online in Nature Physics on 2015 June 1 (Fabrika et al. 2015, "Supercritical Accretion Discs in Ultraluminous X-ray Sources and SS 433",
10.1038/nphys3348). The research was supported by the Japan Society for the Promotion of Science's KAKENHI Grant number 26400228.

1.Generally, black holes with masses between about 100 and about 100,000 times that of the Sun are called "intermediate-mass black holes," although there is no strict definition for the mass range.

2.In a spherically symmetric case, matter cannot fall onto a central object when the radiation pressure exceeds the gravity. This luminosity is called the Eddington limit, which is proportional to the mass of the central object. When matter is accreted at rates higher than that corresponding to the Eddington limit, it is called "supercritical (or super-Eddington) accretion." In the case of non-spherical geometry, such as disk accretion, supercritical accretion may happen.