Astronomers in the Strategic Explorations of Exoplanets and Disks with Subaru (SEEDS) Project have recently discovered and captured an image of the least massive planet ever imaged so far--a so-called "second Jupiter" (Figure 1). This discovery marks an important step toward the direct imaging of much fainter Earth-like planets in the future and may lead to new models of planet formation. It also illustrates the important role that the SEEDS project plays in observational astronomy.

Figure 1: Near-infrared color composite images of a "second Jupiter" around the Sun-like star GJ 504. A coronagraph and differential techniques suppress the bright light from the central star. On the left is the intensity image, which shows the radiant power passing through the area, while on the right is the signal-to-noise ratio image, which shows the weakest signal that the detecting system can recognize. (Credit: NAOJ)

Exoplanets are planets orbiting stars other than our Sun, outside of our Solar System. As of July 2013, most of the 890 exoplanets reported thus far have been discovered by indirect observation techniques, e.g. monitoring the host star for radial velocity variation or planetary transits (Note 1). Such techniques require observations over at least one orbital period and are impractical for detecting planets that are widely separated from their host stars and have long orbital periods. In contrast, direct imaging may be the most important way to observe exoplanets, because it yields information about the planet's luminosity, temperature, atmosphere, and orbit. However, this method is technically challenging, because these distant planets are not only faint but also close to their bright central stars, the glare of which easily obscures an indication of a planet. It's like trying to see a firefly around a distant lighthouse. Only a dozen planets with a location similar in scale to that of the Solar System have been discovered. In spite of these technical challenges, 8 m class telescopes with adaptive optics and coronagraphs that block the light of the central star have reached the high performance necessary to image massive planets at large orbital separations. The Subaru SEEDS project is in the forefront of using direct observation to discover and explore the features of exoplanets.

Discovery of a "Second Jupiter"

Since 2009, SEEDS, an international project approved by the National Astronomical Observatory of Japan (NAOJ) and led by Motohide Tamura (University of Tokyo and NAOJ), has been probing this new frontier with its five-year direct imaging survey of exoplanets and disks around a targeted total of 500 stars. The team is composed of more than 120 members (two-thirds from Japan and one-third in the United States and Europe) and over 25 institutes.


Video: An explanation of what an exoplanet is and why direct imaging of a "second Jupiter" around the Sun-like star GJ 504 is so significant. (Credit: NAOJ)

During the SEEDS survey, a team led by members from the Tokyo Institute of Technology (TiTech), the University of Tokyo, and NAOJ used the High Contrast Instrument for the Subaru Next Generation Adaptive Optics (HiCIAO) (Note 2) mounted on the Subaru Telescope to discover and image planet candidate GJ 504 b that orbits a Sun-like star GJ 504, which is in the constellation Virgo about 60 light years from Earth (Figure 2). They used a mature (160 Myr) host star as a natural guide star for the AO 188 (adaptive optics with 188 elements). GJ 504 is bright and visible to the naked-eye (~5 magnitudes), but the planet is very dim (17-20 magnitudes at infrared wavelengths).

Since a single direct imaging cannot distinguish planet candidates from background stars that happen to be within the small field of view of the camera, the team conducted seven observations, including the use of IRCS (Infrared Camera and Spectrograph) with AO 188, to confirm that GJ 504 b orbits around GJ 504 and is NOT a background star.

What is the mass of this planet? Planet mass is estimated from age and luminosity. However, mass estimates for planets suffer from the uncertainties of cooling models for giant planets. Planetary mass estimates usually assume a hot start, in which the planet is initially in a hot-temperature and luminous state. However, recent theoretical models suggest that giant planets could be much colder initially. The difference between the relation of mass to luminosity decreases with an exoplanet's age and converges after 100 Myr for a five-Jupiter-mass planet. Regardless of which model is used to calculate the mass of this cold, dim object, GJ 504 b, the central star GJ 504 is mature enough (160 Myr) to predict a planetary rather than brown dwarf mass.

Based on the relation of its observed luminosity and estimated age in comparison with the theoretical model, scientists can infer that GJ 504 b has a mass as small as three Jovian masses. If so, it is the lightest-mass planet ever imaged. The apparent distance between the central star and planet is 44 AU (astronomical unit), which is larger than Neptune's orbit and comparable to Pluto's, and the team concludes that they have finally imaged a "second Jupiter". This is an important step toward the direct imaging of much fainter Earth-like planets in future.

The question remains: How did such a giant planet form around a Sun-like star? The standard core accretion model based on our Solar System does not provide an adequate explanation for the formation of these outer planets situated so far from their central stars. This model maintains that the core reaches a critical mass from the accretion of bodies of rock or ice (planetesimals) and subsequently increases with the rapid and direct accumulation of gas from its protoplanetary disk. However, it falls short of explaining how planets beyond 30 AU have developed.

Perhaps another model like gravitational instability of formation sites could supply the answer. This model maintains that a massive protoplanetary disk becomes gravitationally unstable in its outer regions. Consequently, the outer disk fragments, collapsing directly into one or more giant planets. However, gravitational instability has its own challenge. The theory requires that Sun-like stars have very massive disks around them, and it is unlikely that they could obtain enough mass in such outer regions.

At this point scientists cannot definitely say what led to the formation of GJ 504 b. Its features provide the basis for continuing investigation. Subsequent observations reveal that the planet has a unique blue color (Figure 2), which indicates that its atmosphere is less cloudy than that of other imaged planets. 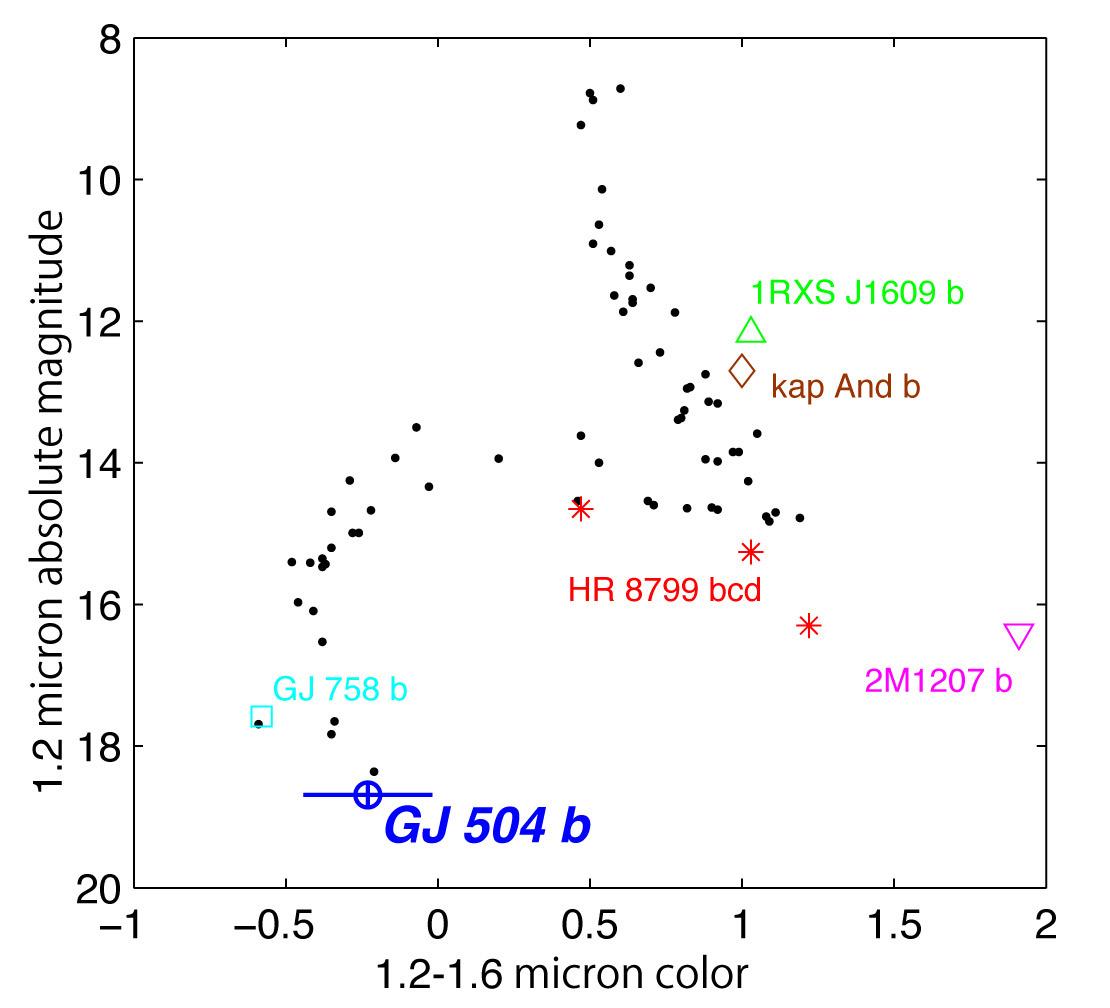 Figure 2: Near-infrared color and magnitude of the planet GJ 504 b, compared with other imaged planets and brown dwarfs. (Credit: NAOJ)

Its relatively cold temperature, less cloudiness, and light mass place it in a physically distinct category from previously imaged planets, which are hotter and have cloudier atmospheres. Additional interesting features include its age (oldest among all directly imaged planets) as well as its wide separation and orbit around a main sequence star with a Sun-like mass.

Other Fruits of the SEEDS Project

In line with the project's aim of using the Subaru Telescope to directly image young planetary-mass objects and circumstellar structures located at relatively large distances from central stars, observers have used HiCIAO (Notes 2 & 3) with the Subaru Telescope to directly image two exoplanets and provide detailed images of more than ten protoplanetary and two debris disks (Figure 3). Observations have yielded reports of the following;

・Giant planet candidates in GJ 758 and Kappa Andromedae ("Direct Imaging of Super-Jupiter Around A Massive Star")
・Detailed structures of disks in AB Aur and LkCa15 ("Direct Images of Disks unravel Mystery of Planet Formation")
・HD 169142, SAO 206462 ("Spiral Structure of Disk May Reveal Planets")
・PDS 70 ("Discovery of a Giant Gap in the Disk of a Sun-like star May Indicate Multiple Planets")
・UX Tau ("Dust Grains Highlight the Path to Planet Formation")
・U Sco J 1604 ("Direct Infrared Image of an Arm in Disk Demonstrates Transition to Planet Formation")
・HR 4796 A ("Subaru's Sharp Eye Confirms Signs of Unseen Planets in the Dust Ring of HR 4796 A")
・HIP 79977
They have also detected interesting fine structures of the disks around many young stars, which show gaps, spiral arms, and rings; these structures may be "signposts of planets". In addition, the image of a companion around HAT-P-7 may explain the retrograde motion of its planet HAT-P-7 b ("The Origin and Maintenance of a Retrograde Exoplanet") 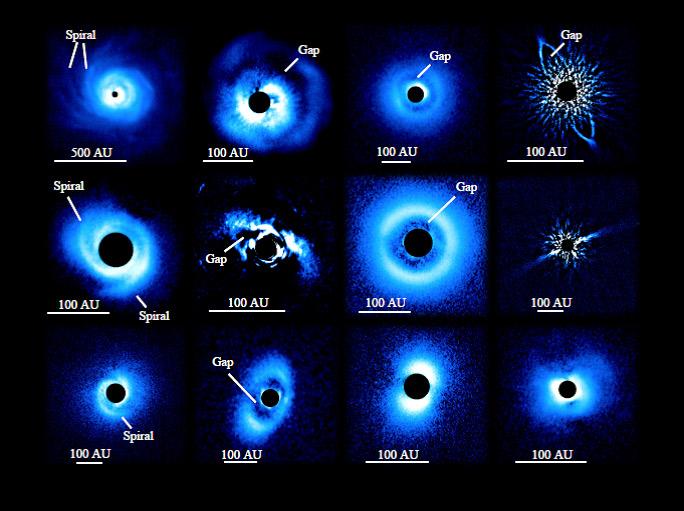 Figure 3: Gallery of disks imaged in the near-infrared by Subaru SEEDS. Note the spirals and gaps in the disks that the images reveal. (Credit: NAOJ)

The Promise of Future Research

The SEEDS Project has finished more than three-quarters of its allotted 120 observation nights. About 500 stars will eventually be observed, and the statistical results on the frequency of outer planets will provide clues to planet formation. Scientists can address such questions as: "How numerous are outer planets?"; "Where and how did they form?"; "What do their atmospheres look like ?"

The team has detected many gaps and spiral-arm structures in disks at the same radial distance where outer planets were discovered. Planets within the disks could explain the formation of these structures and allow scientists to hypothesize that outer planets have formed or are close to their birth. At the very least, the SEEDS results demonstrate that it is now time to revisit current planet formation theory and include the findings about outer planets and disk structures.

SEEDS also will explore the inner regions near the central star with a very advanced adaptive optics system called the Subaru Telescope Coronagraphic Extreme Adaptive Optics (SCExAO, Note 4), which will become available soon. Observations with this technology promise to contribute to better understandings of exoplanetary systems.

Since observations from SEEDS include data on very young stars as well as relatively old ones, these data are and will be used to explore the links between planets and disks as well as the evolution of protoplanetary systems and debris disks. The SEEDS data set will become a dominant source of information in this important field of research for many years to come.


Notes:
1.Indirect observations detect exoplanets by noting the central star's velocity shift (radial velocity method) or the dimming of stellar light as the planet passes by (transit method). In contrast, direct observations directly image the exoplanet rather than inferring its presence by indirect means.

2.HiCIAO is an acronym for High Contrast Instrument for the Subaru Next Generation Adaptive Optics, which has various differential imaging modes (wavelengths, polarizations). This technologically adaptable system replaced the Coronographic Imager with Adaptive Optics (CIAO) in 2007 and has been used with AO 188 for the SEEDS project since October, 2009. Scientists use it to directly observe exoplanets and circumstellar disks. Since the bright light from a central star can hinder the detection of planets, the instrument uses a coronagraph to suppress the bright light of the central star.

4.SCExAO will utilize much more actuators than the current AO system to obtain stellar images that are almost comparable to those obtained in space. It will also utilize a new coronagraphic technique to obtain a higher contrast by about two orders of magnitude.

・The scientific paper on which this article is based will appear in the Astrophysical Journal.
・Other findings from the SEEDS project are posted on the Subaru Telescope website:
◎February 7, 2013, "Direct Infrared Image of an Arm in Disk Demonstrates Transition to Planet Formation"
◎January 24, 2013, "The Origin and Maintenance of a Retrograde Exoplanet"
◎December 19, 2012, "Spiral Structure of Disk May Reveal Planets"
◎November 27, 2012, "Dust Grains Highlight the Path to Planet Formation"
◎November 19, 2012, "Direct Imaging of a Super-Jupiter Around A Massive Star"
◎November 8, 2012, "Discovery of a Giant Gap in the Disk of a Sun-like Star May Indicate Multiple Planets"
◎December 29, 2011, "Subaru's Sharp Eye Confirms Signs of Unseen Planets in the Dust Ring of HR 4796 A"
◎February 17, 2011, "Direct Images of Disks Unravel Mystery of Planet Formation"

・The SEEDS team acknowledges the continuous support given to them by the Subaru Telescope and its instrument teams. This research was supported in part by Grants-in-Aid (# 22000005, 23103002, 23103004), Ministry of Education, Culture, Sports, Science and Technology (MEXT), Japan.