Subaru Telescope Discovers the Most Distant Protocluster of Galaxies

Using the Subaru Telescope, a team of astronomers led by Jun Toshikawa (The Graduate University for Advanced Studies, Japan), Dr. Nobunari Kashikawa (National Astronomical Observatory of Japan), and Dr. Kazuaki Ota (Kyoto University) has discovered the most distant protocluster of galaxies ever found--one that existed less than one billion years after the Big Bang. Since protoclusters are ancestors of today's massive clusters of galaxies, this discovery of a protocluster in the early Universe advances our understanding of how large-scale structures form and how galaxies evolve.

The nearby or "local" universe, an area that extends about 380 million light-years away from Earth, contains many galaxy clusters, i.e., gravitationally bound groups of about 100 to more than 1000 galaxies. These clusters are connected with each other and make up a huge network of galaxies called the "large-scale structure" of the Universe. Such configurations raise fundamental questions: When and how did these structures form in the history of the Universe?

Astronomers think that the Universe started out as an almost homogeneous mass that spread uniformly. Small fluctuations in the initial mass distribution increased by gravity over the 13.7 billion years of the Universe's age and produced the recent array of clusters. Because clusters contain a larger number of old and massive galaxies than those found in isolated galaxies, astronomers speculate that developing clusters may significantly affect the evolution of their member galaxies. Therefore, understanding the details of cluster formation (Note 1) is an essential step in addressing key issues of structure formation and galaxy evolution. A necessary part of this process is an investigation of all stages of cluster formation from beginning to end, which is why the current team gave particular emphasis to studying the birth of clusters.

The team focused on this phase of cluster formation by searching very distant galaxies that existed in the early Universe. Such observations present challenges for a couple of reasons. First, the light from more distant galaxies is faint and difficult to detect. Second, protoclusters in the early Universe are rare. The use of the Subaru Telescope allowed the team to overcome these difficulties. The telescope not only has an 8.2 m primary mirror with large light-gathering power but also offers the advantage of the Subaru Prime Focus Camera (Suprime-Cam) with a wide-field imaging capability. These features are particularly beneficial for discovering faint and rare objects in the distant Universe.

The team chose to observe the Subaru Deep Field, a 0.25 square-degree-wide field in the northern sky near the constellation Coma Barenices. The Subaru Deep Field is one of the most suitable regions for finding protoclusters in the early Universe; the area is not only deep and wide but has been intensively observed with the Subaru Telescope, which has detected very faint galaxies. When the team searched for distant galaxies in the Subaru Deep Field and investigated their distribution, they found a region with a surface number density five times greater than the average (Fig. 1).

Figure 1: Left panel: The distribution of galaxies 12.7 billion years ago. White circles represent the galaxies, and their size represents the luminosity of the galaxies. The color contour represents the density; the redder the color, the higher the density. The reddest region appears in the lower part of the figure. (Credit: NAOJ) Right panel: An enlargement from the map that shows the area around the cluster. (Credit: NAOJ)

The astronomers then used Subaru's Faint Object Camera and Spectrograph (FOCAS) to conduct a spectroscopic observation, which confirmed that most of the galaxies located in the highly dense region lay in a narrow area in the line-of-sight. This concentration of galaxies could not be explained by chance. On the basis of their observations with the Subaru Telescope, the team confirmed the existence of a protocluster 12.72 billion years ago (Fig. 2)--the most distant protocluster found with its distance established by spectroscopic observations (Note 2). The astronomers were able to directly observe this cluster of galaxies at an early stage in galaxy evolution, when structures were beginning to form in the early Universe. This discovery will be an important step on the way to understanding structure formation and galaxy evolution. 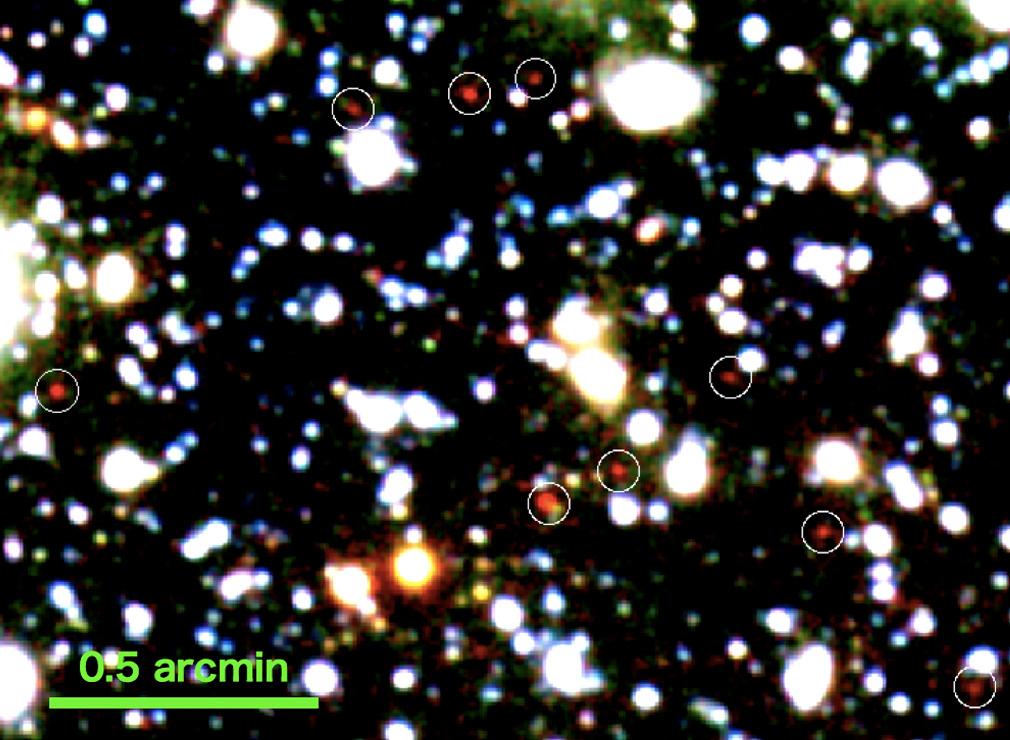 Figure 2: A close-up of the central region of the protocluster. Objects circled in red are galaxies 12.7 billion light-years away. (Credit: NAOJ)

The team will continue their research with the Subaru Telescope's forthcoming Hyper-Suprime Camera (HSC), which has an imaging capability with a field of view seven times wider than Suprime-Cam. The astronomers expect to use HSC to reveal how many protoclusters existed in the early Universe and to provide a better picture of protoclusters in general. Toshikawa summarized the team's intent: "By continually working to find such distant protoclusters, we can understand cluster formation more clearly."

2. Prior to this research, Ouchi et al. used the Subaru Telescope and discovered the most distant protocluster ever found in 2005. In 2012 Trenti et al. found a protocluster candidate beyond 12.7 billion light-years ago, but spectroscopic observations have not confirmed their distances.

4. Investigation of other properties such as mass, age and color is necessary to conclude whether the properties of protoclusters are different from those of field galaxies.

5. The interesting structure in Fig.1 is elongated toward the upper left of the protocluster. A large-scale structure may begin to form in this early Universe. Only the Subaru Telescope could find this large feature.