Image of M31 Heralds the Dawn of HSC's Productivity

A stunning image of M31 captured by Subaru Telescope's Hyper Suprime-Cam (HSC) displays the fruits of international collaboration and technological sophistication aligned with cutting-edge science. In addition to providing information about a nearby galaxy that resembles our own, this image demonstrates HSC's capability to fulfill Subaru Telescope's intention of producing a large-scale survey of the Universe. The combination of a large mirror, a wide field of view, and sharp imaging represents a giant step into a new era of observational astronomy and will contribute to answering questions about the nature of dark energy and matter. It marks another successful stage in HSC's commissioning process, which involves checking all of HSC's capabilities before it is ready for open use. 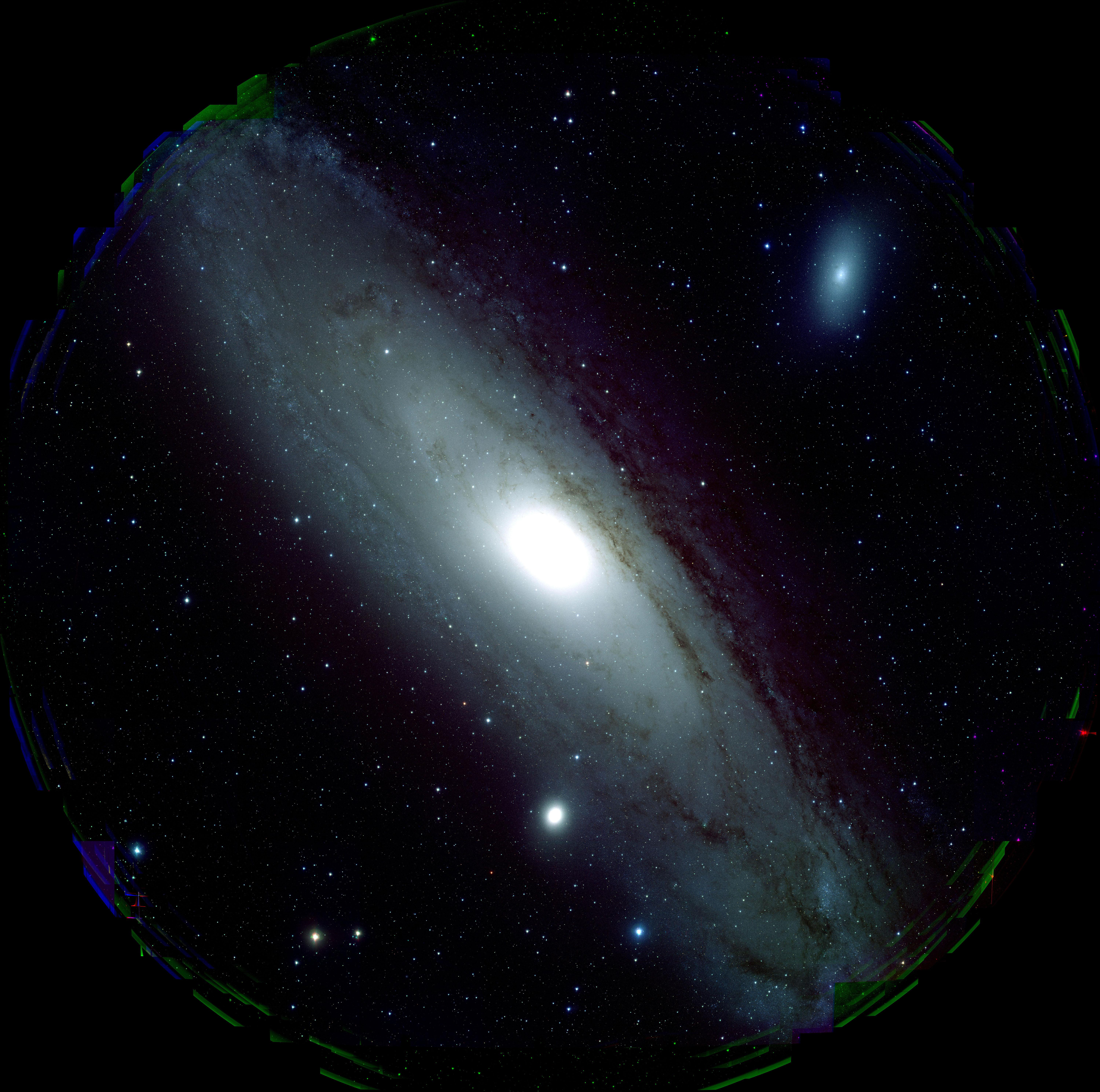 HSC's first beautiful image of M31 gives an answer to the question: Does HSC really deliver what it promises in terms of image quality? It displays a resounding "yes" by demonstrating the sharp, detailed resolution of which the camera is capable across the wide field of view that it embraces. The image indicates why this powerful instrument is unique within the domain of current observational technology, enabling high-resolution images from observations with a large primary mirror (8.2 m) and large field of view (1.5 degrees).

Video: Closeups of the stunning image of M31, the Andromeda Galaxy, taken with Subaru Telescope's new prime-focus instrument, Hyper Suprime-Cam, and showing the details of the high-resolution image. (Credit: HSC Project and NAOJ)

M31, also known as the Andromeda Galaxy, is the spiral galaxy nearest to our own Milky Way Galaxy, 2.5 million light years from Earth. It is one of the brightest objects listed in the Messier catalog and has garnered the attention of observers since 964 A.D., when the Persian astronomer al-Sufi wrote about it. Messier catalogued it as M31 in 1764, 800 years later, and it continues to intrigue the public and astronomers alike. It is visible to the naked eye on moonless nights, even in areas with moderate light pollution. Astronomers find it particularly interesting, because it is quite similar to the Milky Way Galaxy and can provide valuable information about how our own galaxy formed. Since the galactic center is visible, it is possible to investigate how star formation varies in relation to distance from the center of the galaxy. Of particular significance in HSC's image is the consistently high quality of resolution of the objects throughout the frame, which surpasses the clear resolution of the image of the Andromeda Galaxy captured by the Subaru Prime Focus Camera (Suprime-Cam) in 2001 (Figure 2). ("Sister Star World 2.5 Million Light-Years Away"). Although HSC's field of view is seven times larger than that of its predecessor, Suprime-Cam, there is no degradation of the image at the edges. 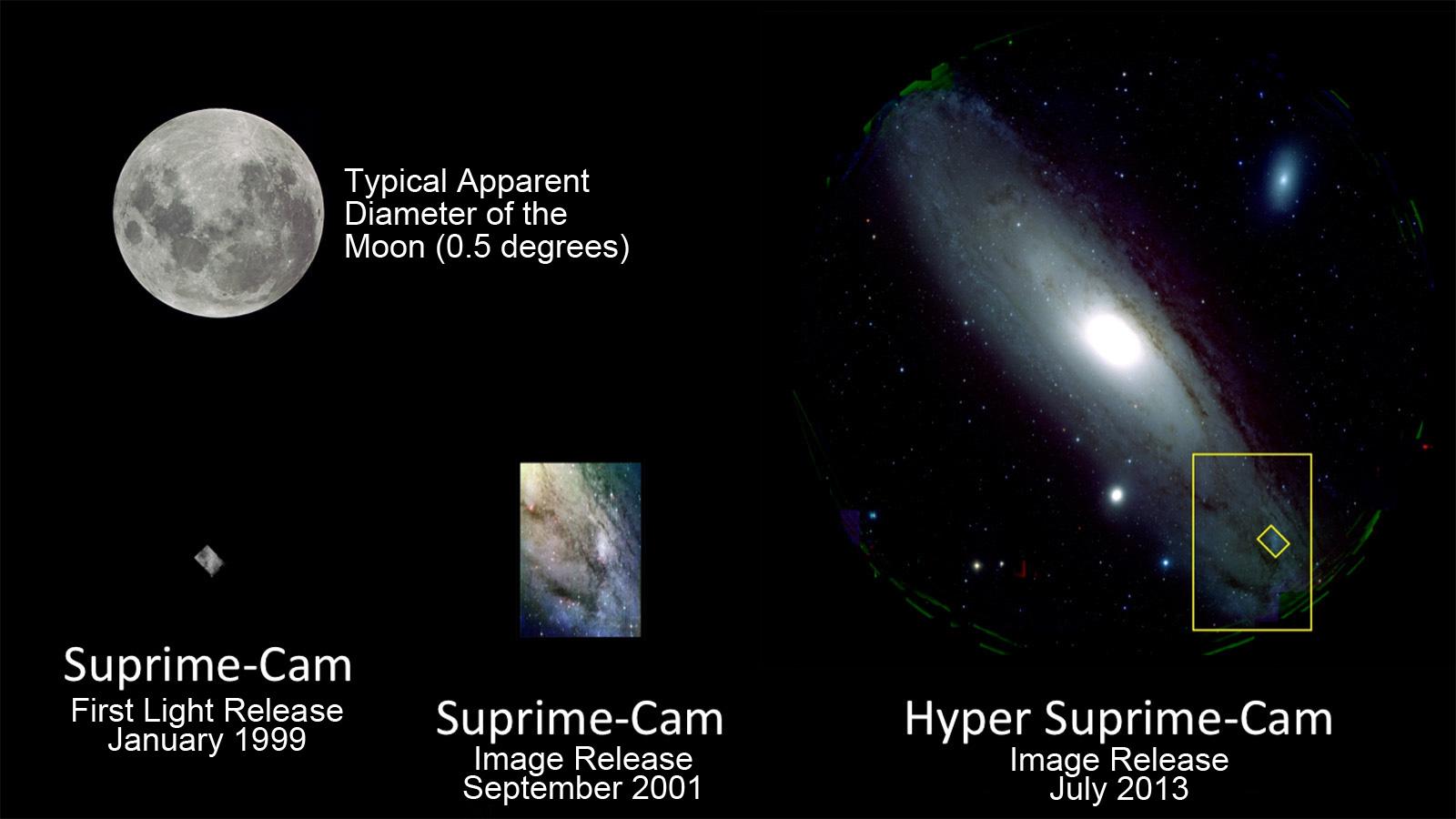 Figure 2: A comparison of the images of M31 captured by Suprime-Cam (bottom left and middle) and HSC (right). The yellow-outlined boxes within HSC's image illustrate the dramatic difference between Suprime-Cam's field of view and HSC's as well as the high quality of resolution in the HSC image. An image of the apparent diameter of the Moon is shown as a reference by which to compare the fields of view of the Suprime-Cam and HSC images. (Credit: NAOJ)

HSC's image of M31 gives tangible evidence of features that HSC's developers had envisioned as early as 2002, when astronomers at Subaru Telescope tried to anticipate the future demands of cosmology-related research that existing technology could not handle. Their foresight led to the establishment of the HSC Project in 2008 and was a catalyst for international collaboration among major research partners-- National Astronomical Observatory of Japan (NAOJ Japan), Kavli Institute for the Physics and Mathematics of the Universe (Kavli IPMU, Japan, from 2007), the School of Science at the University of Tokyo (Japan), KEK (High Energy Accelerator Research Organization, Japan), Academia Sinica Institute of Astronomy and Astrophysics (ASIAA, Taiwan, from 2005), Princeton University (U.S.A., from 2007)--and with outstanding companies from industry--Hamamatsu Photonics K.K., Canon Inc., and Mitsubishi Electric Corporation.

The cooperation of so many institutions and organizations resulted in the completion and installation of the major components of HSC (116 charge-coupled devices, the seven, high-optical quality lenses of the wide field corrector in an innovative ceramic lens barrel, and the prime focus unit) onto the Subaru Telescope on August 16-17, 2012 ("Hyper Suprime-Cam Ushers in a New Era of Observational Astronomy"). Scientists at Princeton University have worked closely with their Japanese colleagues at NAOJ and Kavli IPMU on the software pipelines that are analyzing terabytes of raw data, which not only yield beautiful images but also precise measurements of the brightness, position and shape of every galaxy and star. 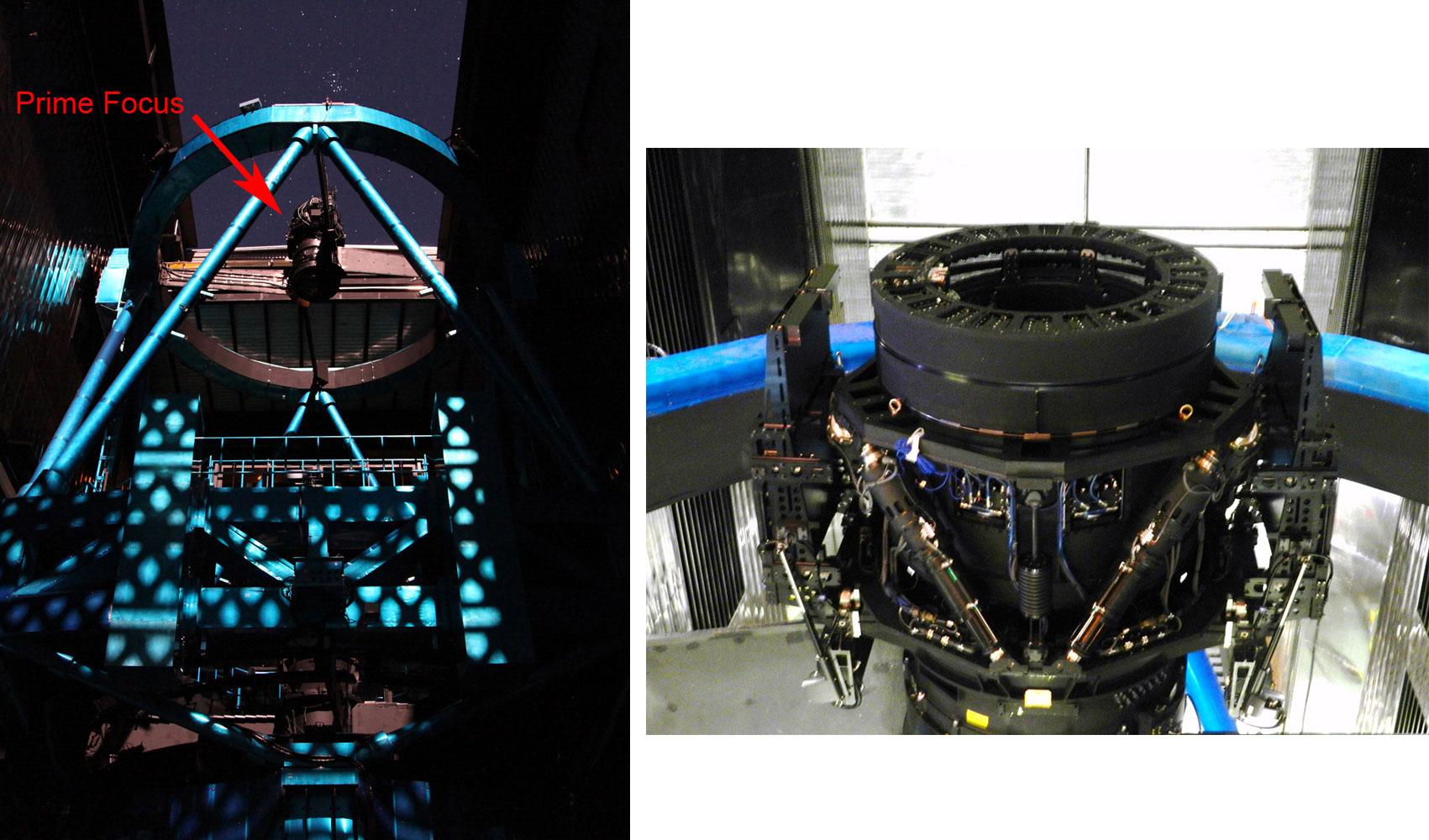 Figure 3: Views of HSC from below and above the top ring. The image on the left shows the position of HSC (without the filter exchange unit or FEU) when mounted on the inner, top ring of the Subaru Telescope. This location is at prime focus, and HSC is 15 meters above the primary mirror. (Credit: NAOJ) The image on the right is a close-up of the top part of HSC with the FEU installed on it. (Credit: ASIAA)

The more recently installed filter exchange unit (FEU) is another example of the fruit of international collaboration. ASIAA (Taiwan) received valuable input from NAOJ about the overall concept of the unit, its requirements, and definition of the interface with the camera. Regular meetings between the partners every few months enhanced the development of the unit. ASIAA and their domestic partner, the Aeronautical Systems Research Division of Taiwan's Chung-Shan Institute of Science and Technology (ASRD), developed and delivered the unit, the building of which took place mainly in Taiwan. As a result of these combined efforts, the completed FEU was ready to use on HSC for the observation of M31. The unit can store up to six filters and position one of them in the optical path. During the exchange process, a motorized cart grasps the required filter and pushes it from the jukebox storing its filters. FEU's operation is fully automated, and it can complete the entire exchange sequence in 14 minutes, a relatively short period of time for such sophisticated, heavy technology. HSC's filters in the FEU help the implementation of HSC's science goals by providing a multi-color data set.

Dr. Satoshi Miyazaki, director of the HSC Project, expressed his deep satisfaction with the high performance of HSC, which shows the significant role that it will play as a tool to realize the scientific objectives envisioned in its design: "The sharp resolution in the current image augurs the instrument's capabilities for capturing weak lensing, which is central to HSC's scientific goals of surveying the parameters and properties of dark matter and dark energy in the Universe as well as exploring the causes of the accelerating expansion of the Universe. In essence, this means an expansion of applications that derive from the instrument's capacity to make nearly invisible, distant faint objects, visible and for bringing dark energy and dark matter into the arena of scientific identification and investigation. The design of HSC facilitates this task with faster survey speed and tenfold expansion of file size, while maintaining quality equivalent to Suprime Cam's."

Dr. Masahiro Takada (Kavli IPMU), the chair of the HSC science working group, enthusiastically affirmed how much the performance of HSC expands the range of potential scientific research: "This first image from HSC is truly exciting. We can now start the long-awaited, largest-ever galaxy survey for understanding the evolutionary history and fate of the expanding Universe. A "cosmic census", i.e. a large-scale imaging survey of every galaxy over a wide solid angle in the sky and in sufficient depth to probe the distant Universe, will include the detailed measurement of hundreds of millions of galaxy shapes and assessment of the effects of gravitational lensing. Such data will allow scientists to map the distribution of dark matter, constrain the nature of dark energy, and search for baby galaxies that were just born in the early Universe."

Astronomers have long dreamed of being able to image billions of galaxies across the sky. As HSC proceeds along a successful path of testing and demonstrates its capabilities, that dream is becoming a reality.

Funding for the HSC Project was provided in part by the following grants: Grant-in-Aid for Scientific Research (ID 15340065) to S. Miyazaki (NAOJ); Grant-in-Aid for Scientific Research on Priority Areas (ID 18072003) to H. Karoji (first at NAOJ, then at Kavli IPMU); and the Funding Program for World-Leading Innovative R&D on Science and Technology (FIRST) entitled, "Uncovering the Origin and Future of the Universe-ultra-wide-field imaging and spectroscopy reveal the nature of dark matter and dark energy" to H. Murayama (Kavli IPMU).