A team of astronomers using the Subaru Telescope's Suprime-Cam to perform the Subaru Ultra-Deep Survey for Lyman-alpha Emitters have looked back more than 13 billion years to find 7 early galaxies that appeared quite suddenly within 700 million years of the Big Bang (Note 1). The team, led by graduate student Akira Konno and Dr. Masami Ouchi (Associate Professor at the University of Tokyo's ICRR) was looking for a specific kind of galaxy called a Lyman-alpha emitter (LAE), to understand the role such galaxies may have played in an event called "cosmic reionization". (Figure 1) 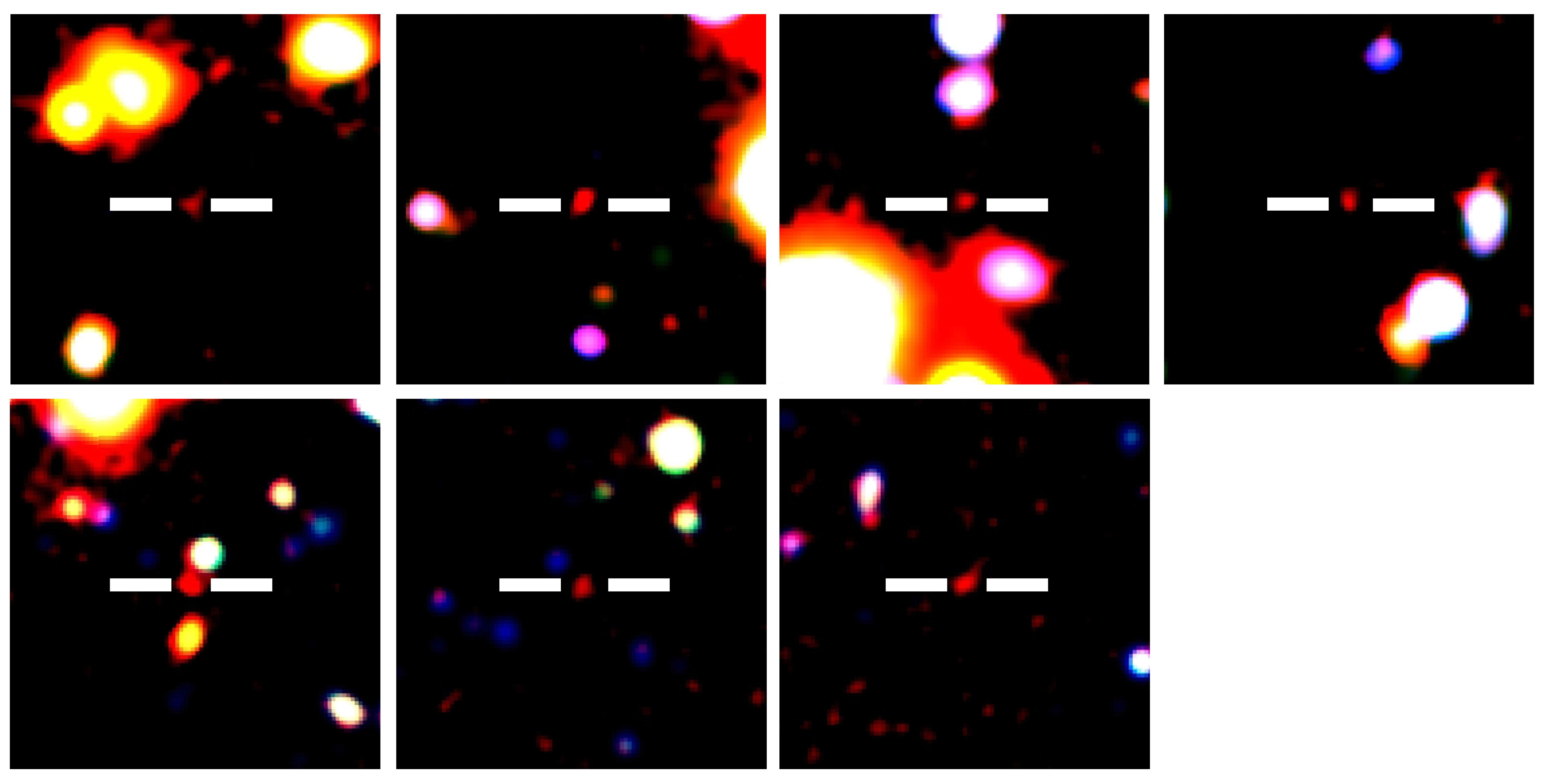 Figure 1: Color composite images of seven LAEs found in this study as they appeared 13.1 billion years ago. This represents the combination of three filter images from Subaru Telescope. Red objects between two white lines are the LAEs. The LAEs of 13.1 billion years ago have a quite red color due to the effects of cosmic expansion on their component wavelengths of light. (Credit: ICRR, University of Tokyo; NAOJ)

LAE galaxies are illuminated by strong hydrogen excitation (called Lyman-alpha emission) (Note 2). The team's discovery of these LAEs at a distance of 13.1 billion light-years suggests that LAE galaxies appeared rather suddenly in the early universe.

The universe was born in the Big Bang some 13.8 billion years ago. In its earliest epochs, it was filled with a hot "soup" of charged protons and electrons. As the newborn universe expanded, its temperature decreased uniformly. When the universe was 400,000 years old, conditions were cool enough to allow the protons and electrons to bond and form neutral hydrogen atoms. That event is called "recombination" and resulted in a universe filled with a "fog" of these neutral atoms.

Eventually the first stars and galaxies began to form, and their ultraviolet light ionized (energized) the hydrogen atoms, and "divided" the neutral hydrogen into protons and electrons again. As this occurred, the "fog" of neutrals cleared. Astronomers call this event "cosmic reionization" and think that it ended about 12.8 billion years ago (about a billion years after the Big Bang). The timing of this event – when it started and how long it lasted – is one of the big questions in astronomy.

Mr. Konno, the graduate student heading the analysis of the data from the Subaru Telescope pointed out the obstacles that Subaru had to overcome to make the observations. "It is quite difficult to find the most distant galaxies due to the faintness of the galaxies." he said. "So, we developed a special filter to be able to find a lot of faint LAEs. We loaded the filter onto Suprime-Cam and conducted the most distant LAE survey with the integration time of 106 hours."

That extremely long integration time was one of the longest ever performed at Subaru Telescope. It allowed for unprecedented sensitivity and enabled the team to search for as many of the most distant LAEs as possible. According to Konno, the team expected to find several tens of LAEs. Instead they only found seven.

"At first we were very disappointed at this small number," Konno said. "But we realized that this indicates LAEs appeared suddenly about 13 billion years ago. This is an exciting discovery. Figure 2 shows how the luminosities of LAEs changed based on this study. We can see that the luminosities suddenly brightened during the 700-800 million years after the Big Bang. What would cause this? 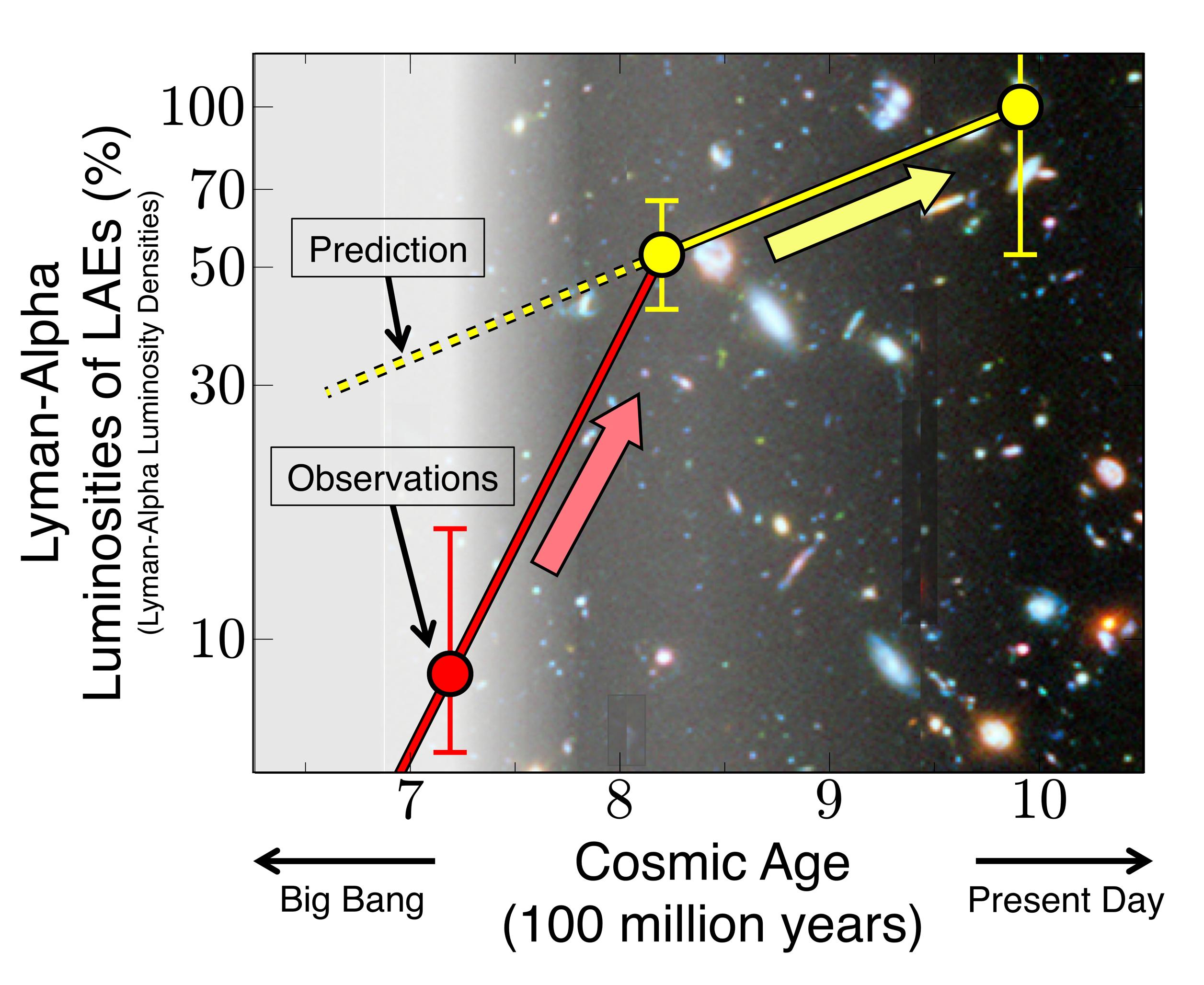 Figure 2: This shows evolution of the Lyman-alpha luminosities of the galaxies. The yellow circle at 1 billion years after the Big Bang is used for normalization. The yellow circles come from previous studies, and the yellow dashed line shows the expected evolutionary trend of the luminosity. The current finding is shown by a red circle, and we can see that the galaxies appear suddenly when the universe was 700 million years old. This indicates that the neutral hydrogen fog was suddenly cleared, allowing the galaxies to shine out, as indicated by the backdrop shown for scale and illustration. Click here to see the diagram without the labels inside. (Credit: ICRR, University of Tokyo; Hubble Space Telescope/NASA/ESA)

According to the team's analysis, one reason that LAEs appeared very quickly is cosmic reionization. LAEs in the epoch of cosmic reionization became darker than the actual luminosity due to the presence of the neutral hydrogen fog. In the team's analysis of their observations, they suggest the possibility that the neutral fog filling the universe was cleared about 13.0 billion years ago and LAEs suddenly appeared in sight for the first time."

"However, there are other possibilities to explain why LAEs appeared suddenly," said Dr. Ouchi, who is the principal investigator of this program. "One is that clumps of neutral hydrogen around LAEs disappeared. Another is that LAEs became intrinsically bright. The reason of the intrinsic brightening is that the Lyman-alpha emission is not efficiently produced by the ionized clouds in a LAE due to the significant escape of ionizing photons from the galaxy. In either case, our discovery is an important key to understanding cosmic reionization and the properties of the LAEs in early universe."

Dr. Masanori Iye, who is a representative of the Thirty Meter Telescope (TMT) project of Japan, commented on the observations and analysis. "To investigate which possibility is correct, we will observe with HSC (Hyper Suprime-Cam) on Subaru Telescope, which has a field of view 7 times wider than Suprime-Cam, and TMT currently being built on the summit of Mauna Kea in Hawaii in the future. By these observations, we will clarify the mystery of how galaxies were born and cosmic reionization occurred."

This research is published in the November 20, 2014 issue of The Astrophysical Journal. The work was supported by the Carnegie Observatory, World Premier International Research Center Initiative (WPI Initiative), MEXT, Japan, and KAKENHI (23244025) Grant-in-Aid for Scientific Research (A) through Japan Society for the Promotion of Science (JSPS).

1.The values of the cosmic age and distance in this press release are based on the latest Planck results. Planck observes the cosmic microwave background. A previous press release on this subject used values based on the cosmological parameters derived from the measurements by WMAP (Wilkinson Microwave Anisotropy Probe).
The parameters used here are H_0=67.1 km/s/Mpc, Ω=0.317, Λ=0.683 instead of the ones used in the past articles at Subaru Telescope's website H_0=71, Ω=0.27, Λ=0.73.

2.Lyman-alpha emission line is a spectral line of hydrogen, with a wavelength of 121.6 nm (1nm is one billionth of a meter), and is in the ultraviolet portion of the spectrum. Galaxies illuminated by strong Lyman-alpha line are called "Lyman-alpha emitting galaxies" (LAEs).

3.In previous studies, astronomers have found hundreds of LAEs existing 12.9 billion years ago, which corresponds to the epoch when cosmic reionization finally ended.