Scientists have used the Subaru Telescope and the W. M. Keck Observatory to study the Umbrella Galaxy (NGC 4651), a twin of the Milky Way Galaxy, and to accurately model how it is swallowing a smaller galaxy. Their findings reveal insights into galactic behavior and contribute to a better understanding of how structure forms in the Universe. 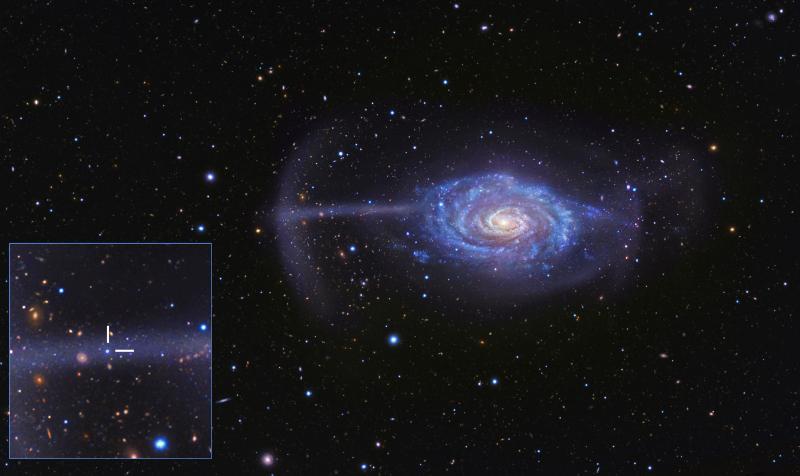 Figure: The Umbrella Galaxy takes its name from a mysterious feature seen on the left here, that is now found to be debris from a tiny galaxy, only a 50th its size, shredded apart by gravity. The image is a combination of data from the 0.5 m BlackBird Remote Observatory Telescope and Suprime-Cam on the 8 m Subaru Telescope. (Credit: NAOJ and R. Jay GaBany)

The Umbrella Galaxy, named for the umbrella-shaped structure extending from its disk, is about 62 million light-years away from Earth in the northern constellation of Coma Berenices. Its faint parasol is composed of a stellar stream, thought to be the remnants of a smaller galaxy being pulled apart by the large galaxy's intense gravitational field, which may eventually absorb this small galaxy completely.

Although small galaxies often merge into larger ones throughout the Universe, it has been difficult to provide three-dimensional details of how such mergers proceed, because the shredded galaxies are so faint. Observations with the Subaru Prime Focus Camera (Suprime-Cam) and Keck Observatory's Deep Imaging and Multi-Object Spectrograph (DEIMOS) have enabled a team of astronomers, led by Caroline Foster (Australian Astronomical Observatory), to identify enough details of the Umbrella Galaxy's merger to provide a specific model of how and when it occurred. Suprime-Cam captured panoramic images of the Umbrella Galaxy, and then DEIMOS, installed on the Keck II telescope, mapped out the motions of the stream, which allowed scientists to determine how the galaxy is being shredded.

Because the stars in the stream are extremely faint, the scientists used a proxy technique to measure the speeds of brighter objects moving along with the stream stars. These bright "tracers" include globular star clusters, planetary nebulae (i.e., bright clouds of glowing gas and dust surrounding highly evolved stars), and patches of glowing hydrogen gas.

Co-author Aaron Romanowsky (San José State University and University of California Observatories) summed up the significance of the research: "This is important because our whole concept about what galaxies are and how they grow has not been fully verified. We think they are constantly consuming smaller galaxies as part of a cosmic food chain, all pulled together by a mysterious form of invisible 'dark matter'. When a galaxy is torn apart, we sometimes get a glimpse of the hidden vista because the stripping process lights it up. That's what occurred here."

Foster highlighted the importance of innovative instrumentation of telescopes such as the Subaru Telescope and Keck Observatory in uncovering processes that govern the Universe: "Through new techniques we have been able to measure the movements of the stars in the very distant, very faint, stellar stream in the Umbrella. This allows us, for the first time, to reconstruct the history of the system." Romanowsky added, "Being able to study streams this far away means that we can reconstruct the assembly histories of many more galaxies. That means that we can get a handle on how often these 'minor mergers' — thought to be an important way that galaxies grow — actually occur. We can also map out the orbits of the stellar streams to test the pull of gravity for exotic effects, much like the Moon going around the Earth, but without having to wait 300 million years for the orbit to complete."

This article is based on a press release from Keck Observatory, posted on June 30, 2014.

Reference to the research paper: