3-D Observations of the Outflow from an Active Galactic Nucleus

A Japanese team of astronomers, led by Toru Misawa (Shinshu University), has used the Subaru Telescope to observe a distant gravitationally-lensed quasar (Note 1) and probed an active galactic nucleus in its central region. Looking through multiple sight lines, the astronomers obtained a 3-D view of the quasar and discovered complex small structures inside outflows from the galactic nucleus. These outflows will spread widely and eventually affect the evolution of the host galaxy. 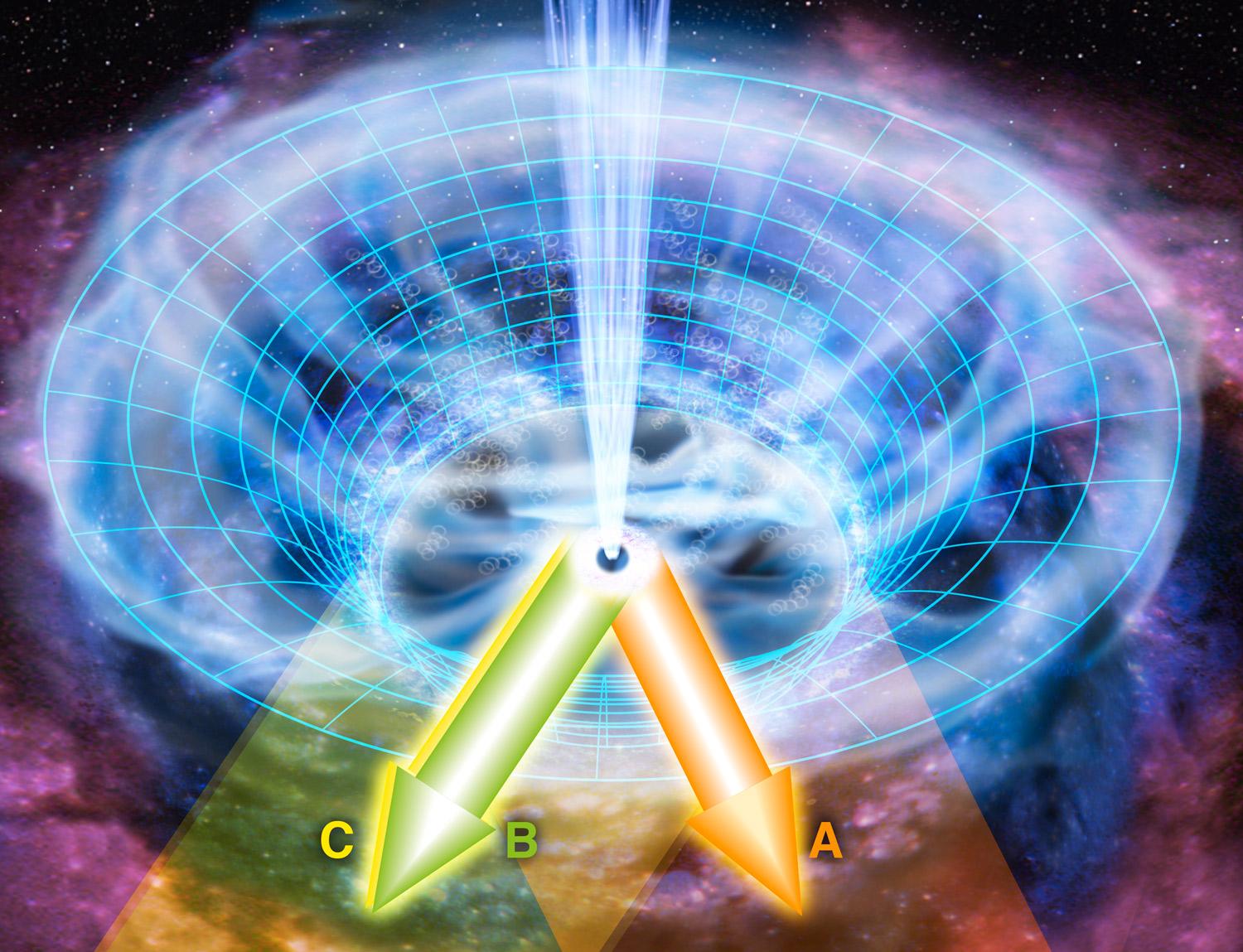 Figure 1: An artist's rendition of the central region of the quasar. A gaseous disk surrounds a central black hole. The outflow is gas streaming from the disk outward along the curved mesh, which indicates the distortion of space/time, and is distinguished from a jet that is blowing vertically. The arrows A, B, and C indicate the light paths observed, which probably pass near the surface of an outflow. (Credit: Shinshu University and the National Astronomical Observatory of Japan)

Quasars are bright central regions of some distant galaxies. Their luminosities are often hundreds of times greater than those of their host galaxies (Note 2). Scientists believe that their light source is a very bright gaseous disk surrounding a supermassive black hole at the center of the galaxy. Gas streams called "outflows" move outward from the disk (Figure 1) and have a substantial influence on surrounding interstellar/intergalactic regions. However, because quasars at large distances look like mere stars, their internal structures are not easy to investigate.

Figure 2: Left: Schematic drawing of the gravitational lensing, showing SDSS J1029+2623 (at ~10 billion light years), a cluster of galaxies (at ~5 billion light years), and Earth. An outflow is a very small domain surrounded by a large ring of dust. Right: An Earthly analogy of gravitational lensing. The diagram shows how scenery looks from different directions (without considering the image distortion by the lensing) and serves as a comparison to the lensed images of the quasar. (Credit: Shinshu University and the National Astronomical Observatory of Japan)

The current team used the large light-gathering power of the 8.2 m Subaru Telescope mounted with its high-resolution spectrograph HDS (High Dispersion Spectrograph) to observe the quasar SDSS J1029+2623 (from now on referred to as "J 1029") and examine its structure. This quasar is ~10 billion light years distant from Earth (Note 1) toward the constellation Leo, and a massive cluster of galaxies, ~5 billion light years away, lies between the quasar and Earth (Figure 2). Because astronomical objects are usually very distant, they are difficult to study from different angles. Nevertheless, gravitational lensing opens up this possibility. If a cluster of galaxies lies along the line of sight to a distant quasar, then part of the light from the distant quasar (the "lensed quasar") bends around the intervening cluster (the "lensing cluster"), and observers will see more highly resolved and brighter images of the now magnified background quasar. Due to the gravitational lensing by the cluster intervening between J 1029 and Earth, there is significant distortion in the light path from the quasar, and it splits into three images: A, B, and C (Figure 3, Note 3). The maximum separation angle, ~22".5 (Note 4), between images A and B is a current record; it is larger than the typical separation of quasar images lensed by a single galaxy. The team hypothesized that each lensed image could contain information on the outflow from the quasar when viewed from different angles (Figures 1 and 2). 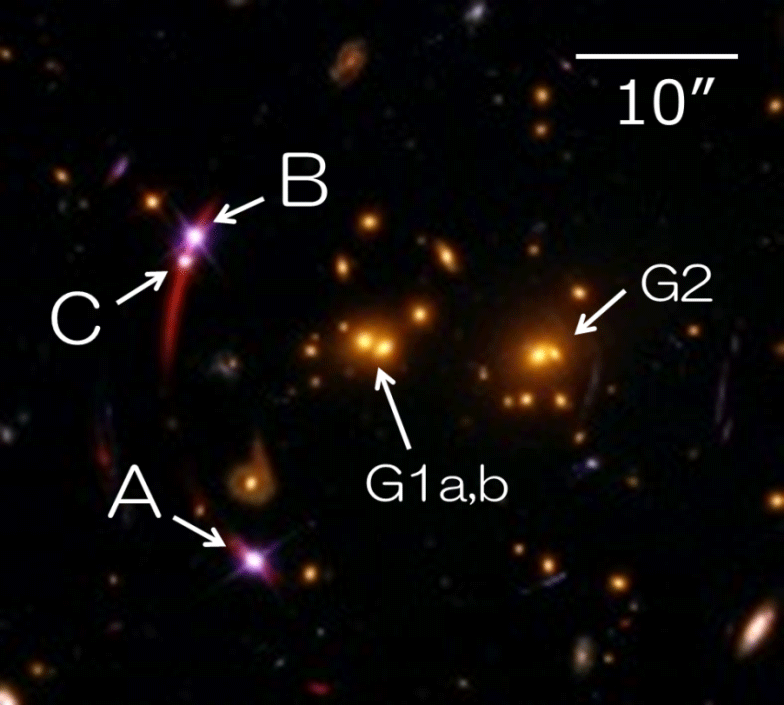 Figure 3: Color image of the region around SDSS J1029+2623, taken with Hubble Space Telescope. Quasar images (marked with A, B, and C) are gravitationally lensed by a foreground cluster of galaxies. Three galaxies of the lensing cluster (marked as G1a, b and G2) are visible. (Credit: Shinshu University, the National Astronomical Observatory of Japan, and Kavli Institute for the Physics and Mathematics of the Universe)

The team used Subaru Telescope's HDS to perform spectroscopic observations of the brightest two images A and B (Note 5), and their results supported their hypothesis. Any absorber between the quasar and Earth provides absorption features in the spectra of the quasar images. While most absorption features originate from foreground objects that are physically unrelated to the quasar, some show clear evidence of origins from the outflow, such as partial coverage by clouds (Note 6). Those features show a clear difference between the images A and B, although they are generally similar (Figure 4). This result supports the idea that the sight lines are going through different areas of the outflow from different directions. When viewed through one eye alone, an object appears to be two-dimensional, but viewing with both eyes yields a 3-D image that provides multi-directional information. This process is analogous to what occurred in the observations (Figure 2, Note 7). 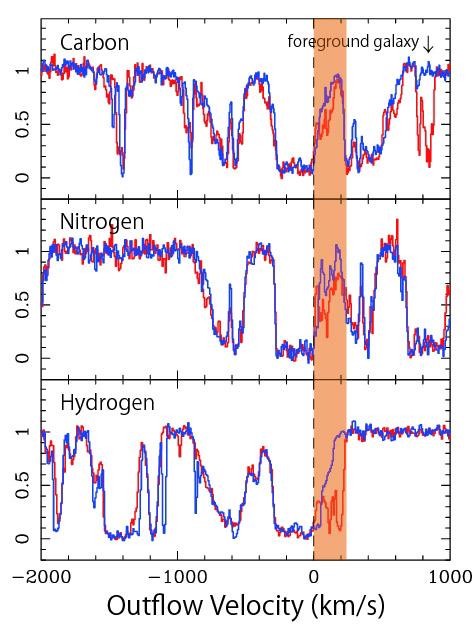 Figure 4: Comparison of absorption features of three elements, carbon, nitrogen, and hydrogen (from top to bottom), seen in spectra of the lensed images A (red line) and B (blue line). All of them arise at the outflow. A horizontal axis is an outflow velocity from the light source, defined as negative if it heads to Earth. The shaded area shows a clear difference between the images A and B. (Credit: Shinshu University and the National Astronomical Observatory of Japan)

It is surprising that the absorption profiles arising in the outflow show clear differences between them, despite the small separation angle of ~22".5. Misawa commented on this discovery saying, "The outflow may not necessarily be homogeneous, but could instead have a complex internal structure with a number of clumpy gas clouds like cirrocumulus clouds in Earth's atmosphere. The team plans to observe the area in image C in more detail." Direct observation of a clumpy structure in tandem with theoretical analysis will contribute to revealing the mysterious formation history of these outflows.

The team has also explored other explanations for the outflows. Because the light paths of the images A and B are different, they have a substantial time difference between them when they reach Earth (Note 8). If the internal structure of the outflow varies with time, the two images deliver information about different epochs even if they pass through the same region of the outflow. The astronomers intend to conduct observations with the Subaru Telescope in March, 2013 to test the "time-variation" scenario.

The research paper on which this release is based was published on-line in the January 15, 2013 edition of The Astronomical Journal: T. Misawa et al., "Spectroscopy along Multiple, Lensed Sight Lines through Outflowing Winds in the Quasar SDSS J1029+2623", vol. 145, issue 2, article id. 48 (2013). The authors of the paper are:

1.It corresponds to a redshift of z~2.197. A "z" or redshift value measures how much the expansion of space has stretched the light from an object. Generally, the greater the observed z value for a galaxy, the more distant it is in time and space from Earth.

2.Because their appearance is star-like, they are called "quasi-stellar objects" and abbreviated as quasars.

6.This means that an absorber only partially covers the background light source toward the sight line. Because foreground interstellar or intergalactic media are larger than the light source of the quasar by more than several orders, only small gas clouds in the vicinity of the quasar can reproduce a partial coverage.