Dr. Glenn Orton (Jet Propulsion Laboratory, National Aeronautics and Space Administration [NASA], USA), lead of an international team of astronomers observing changes in Jupiter (Note), presented some of the team's new research results at the American Astronomical Society's Division for Planetary Sciences Meeting in Reno, Nevada on October 17, 2012. Their data show a planet undergoing dramatic changes: continual peppering with small space rocks, wide belts of color change in its atmosphere, vanishing and reappearing hotspots, and clouds gathering over one area while dissipating over another.

These researchers have been making infrared observations of Jupiter since 2009 and comparing them with high-quality optical images taken by amateur astronomers. From 2009 to 2011, they studied the fading and darkening of the South Equatorial Belt (SEB), a prominent brown-colored belt just south of the equator, as well as similar fading and darkening of the North Equatorial Belt (NEB), a band just north of the equator. In 2011 the northern belt grew white over a wider extent than it had been in over a century; in 2012, it began to darken again. 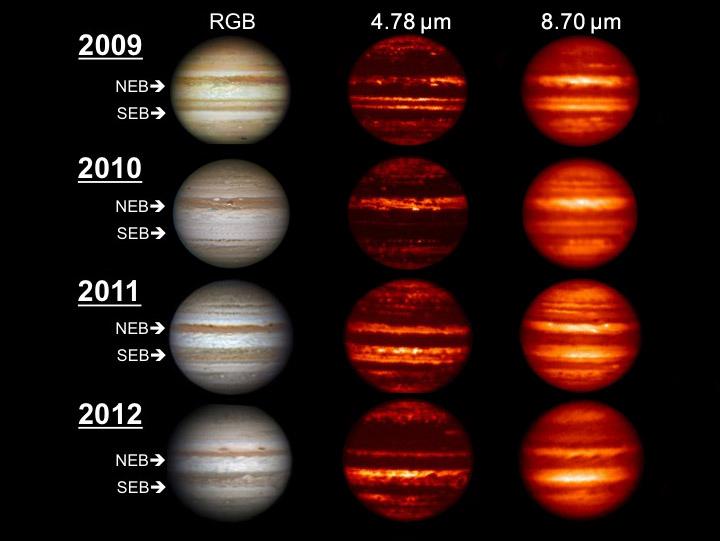 Figure: Global Upheaval on Jupiter
Comparison of the images in the visible-light (left) and infrared (middle and right) parts of the spectrum from 2009 to 2012 highlight the massive changes affecting the atmosphere of Jupiter.
Credit for individual images in the composite:
・Left: Visible light images from A. Wesley (2009 and 2010), A. Kazemoto (2011) and C. Go (2012)
・Middle: Infrared images from IRTF (JPL-Caltech, NASA)
・Right: 8.7 micron wavelength images from IRTF (JPL-Caltech, NASA) (2009, 2010, 2012) and Subaru Telescope (National Astronomical Observatory of Japan) (2011)
Credit for composite creation: JPL-Caltech, NASA

Using the Cooled Mid-Infrared Camera and Spectrograph (COMICS) on the 8.2 meter Subaru Telescope and mid- and near-infrared instruments on NASA's 3 meter Infrared Telescope Facility (IRTF), both atop Mauna Kea on the Island of Hawaii, the researchers matched up their infrared observations of changes in cloud thickness of several of Jupiter's bands with the changes in their brightness and color. Their data revealed more detailed information about the features they had previously observed. Although the deeper cloud decks of the North Equatorial Belt thickened simultaneously, they did not thicken and clear up like those in the South Equatorial Belt; there was only a partial thickening of the upper cloud deck of the northern belt. The recent infrared data also resolved distinct features called "brown barges", brown, elongated features in the newly whitened area of the usually dark North Equatorial Belt, which are more cloud-free regions characterized by downwelling, dry air. Finally, a series of blue-gray features, which appear to be the clearest and driest regions on Jupiter, show up as apparent hotspots in the infrared view. The infrared observations reveal radiation emerging from a very deep layer of Jupiter's atmosphere. Although the hotspots disappeared from 2010 to 2011, they reappeared in June of 2012 and coincided with the whitening and re-darkening of the North Equatorial Belt. As Jupiter's atmosphere has been churning through changes, amateur Jupiter-watchers on Earth have observed fireballs created by objects hurtling into Jupiter's atmosphere. However, the researchers' infrared investigations showed that the most recent object, probably less than 15 meters (45 feet) in diameter, did not cause lasting changes in the atmosphere.

Orton commented on the significance of the observed changes: "The changes we're seeing in Jupiter are global in scale. We've seen some of these before, but never with modern instrumentation to clue us in on what's going on. Other changes haven't been seen in decades, and some regions have never been in the state they're appearing in now. At the same time, we've never seen so many things striking Jupiter. Right now we're trying to figure out why this is all happening." In any case, Jupiter, a mythical Roman sky god associated with thunder and lightening, would certainly be pleased with all of the changes afoot on his namesake planet.