On Saturday, April 6, 2013, volunteers from Subaru Telescope joined other members of the MKAOC (Mauna Kea Astronomy Outreach Committee) group to march in the annual Merrie Monarch parade. This year's event culminated nearly a week of festivities marking the 50th anniversary of the Merrie Monarch Festival, a hula and cultural festival named in honor of King Kalakaua, the last reigning king of the Kingdom of Hawaii (1874-1891). Often referred to as the Merrie Monarch because of his enthusiasm for life's joyful experiences, Kalakaua restored many Hawaiian traditions, like the hula, to encourage his followers to have a sense of pride in their culture.

Numerous groups showed their enthusiasm and joy as they assembled to become part of one of Hilo's largest community-wide events. As the MKAOC group was gathering behind its banner in front of a palm-decorated vehicle carrying a telescope, Governor Neil Abercrombie dropped by to greet the marchers. He praised the efforts of the Mauna Kea observatories as a "rebirth of exploration", thus connecting traditional Hawaiian practices with contemporary astronomy. The Polynesian wayfarers directly observed the Sun, Moon, stars, winds, currents, and wildlife over 1,500 years ago to steer their voyaging canoes to Hawaii's shores. Since early times in the islands, Hawaiians understood the close connection between the patterns of objects in the sky and life on Earth. 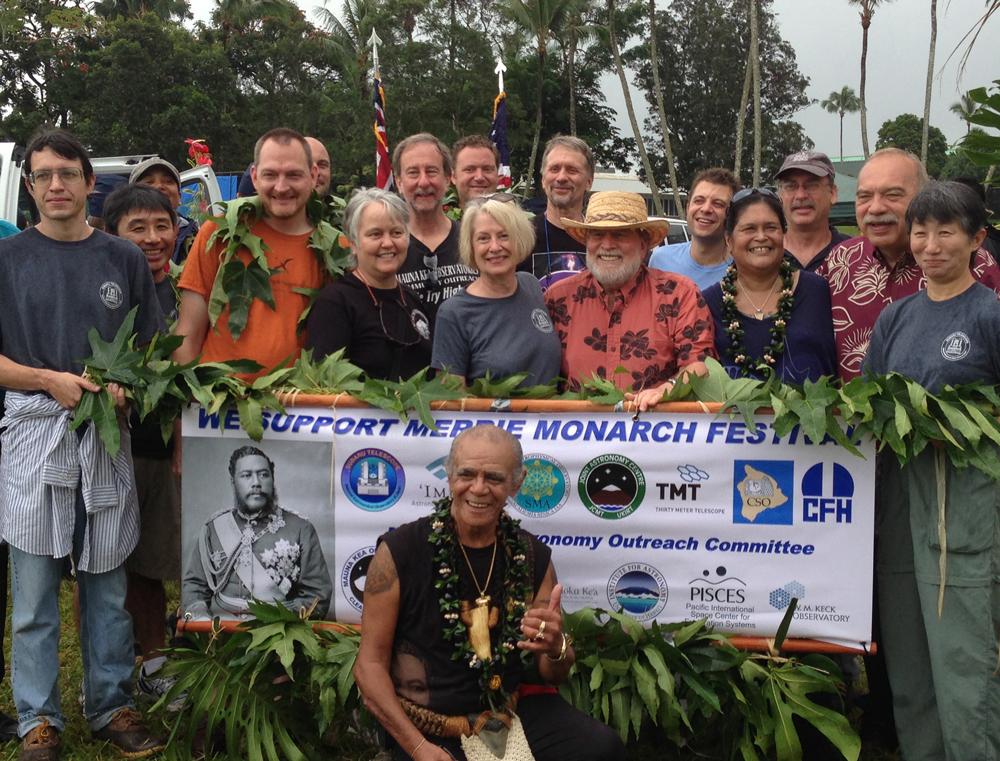 Figure: Many of the participants in MKAOC's group that marched in the Merrie Monarch Parade. Governor Neil Abercrombie (in the straw hat in the center) as well as former governor John Waihee (in the aloha shirt on the far right) visited the group to offer their support for MKAOC's activities and participation in the parade. (Credit: Mauna Kea Visitor Information Station)

As if to distinguish this parade from its predecessors of the past few years, the Sun shone brilliantly once the procession began, replacing misty rain with brightness and warmth. For over three hours, the long parade wound its way on a route along some of Hilo's main streets--from Pauahi Street and then down Kilauea, Waianuenue and Kamehameha Avenues. The cheers of spectators for the local groups that passed by them reinforced the sense of celebration and community spirit that permeated the event. Each group stopped briefly at the end of the route to pay their respects to the Royal Court, a fitting reminder of the respect and connection that the present community shows for its traditions and each other.